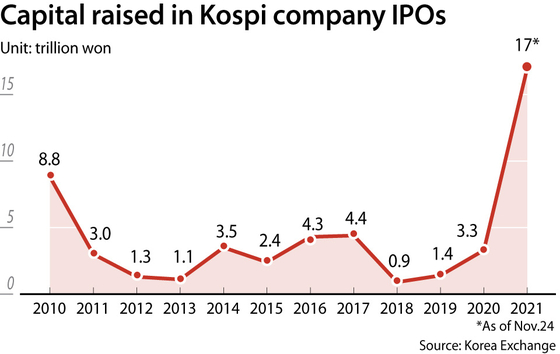 Listings have hit a record this year, beating the last peak hit way back in 2010.

According to the Korea Exchange on Wednesday, 20 companies have gone public as Kospi companies so far this year, raising 17 trillion won ($14.3 billion).

The previous record was 8.8 trillion won raised by 29 companies in 2010 full year.

The Korean stock market operator said in a statement that as three more companies are expected to list as Kospi stocks by year end, that will make a total of 23 companies newly listing as Kospi stocks this year raising roughly 17.2 trillion won.

There were some mega IPOs this year, including the listing of game maker Krafton, which raised 4.3 trillion won. That is the second largest amount raised after the 4.9 trillion won raised by Samsung Life Insurance in 2010. 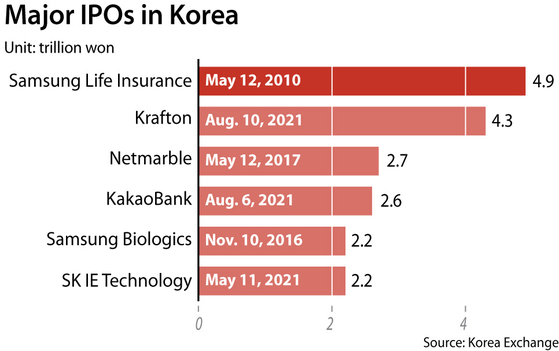 Participating in IPOs became somewhat of a fad this year, especially as retail investors were looking for assets to invest in with money they borrowed at historically low rates.

"Participation of retail investors increased after the Covid-19 pandemic boosted the market," Korea Exchange said in a statement.

Companies found listing attractive, according to the Korea Exchange, as the exchange eased requirements for going public. In March, the exchange operator lowered capital minimums.

The Korea Exchange is ranked No. 7 globally both in terms of capital raised and number of listings so far this year, according to data from the World Federation of Exchanges.

Nasdaq had a record number of IPOs this year as of the end of October, with 279 companies going public on the market. By the amount of capital raised from the IPOs, the New York Stock Exchange was the largest, at $98.3 billion.
Korea Exchange handled 109 new listings so far this year, raising $18 billion.

Despite signs of the IPO market losing some steam toward the year end, with some companies, like SM Line, recently deciding to indefinitely delay their listings, the exchange said the IPO market is expected to continue growing in 2022, boosted by IPOs by battery maker LG Energy Solution and Hyundai Engineering.

The two companies have already applied for preliminary screening by the Korea Exchange.

Other companies expected to pursue IPOs in 2022 include SSG.com, Kakao Entertainment and Kurly.