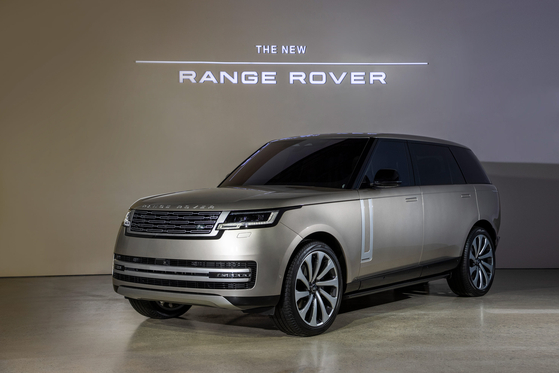 It will start sales next year.

The new Range Rover SUV is available in various powertrains including petrol, a so-called mild hybrid, and plug-in hybrid. Mild hybrid cars, which use an electric motor and a combustion engine, cannot drive on electric power alone, while a plug-in hybrid can.

A fully electric version will come in 2024, and will be the brand's first all-electric model in Korea.

The new Range Rover is the first model to be built with what the company calls a Modular Longitudinal Architecture, which give a car 50 percent more torsional rigidity than previous models and reduce noise transmission by 24 percent

The new Range Rover is available in both standard and long-wheelbase forms. Buyers can choose from four-, five, or seven-seat configurations. It is the first Range Rover in the company's 51-year history to have seven seats.

“We don’t launch new Range Rovers very often,” Robin Colgan, managing director of Jaguar Land Rover Korea, said during a press event Wednesday. "This is quite simply the smartest, most luxurious, most refined and most connected Range Rover we’ve ever created.

“After the global premiere in London four weeks ago, we have already received more than 1,000 orders from Korean customers.”

The P530 trim of the new Range Rover, equipped with a 4.4-liter twin-turbocharged V8 engine, can generate a maximum of 530 horsepower and 76.5 kilogram-meters (553 pound-feet) in torque. The petrol-powered vehicle can reach 100 kilometers (62 miles) per hour in just 4.6 seconds, and can run at a maximum speed of 250 kilometers per hour.

The D350, a mild hybrid model that comes with 3.0-liter six-cylinder Ingenium diesel engine, offers a maximum output of 350 horsepower and a torque of 71.4 kilogram-meters. It can reach 100 kilometers (62 miles) per hour in just 6.1 seconds.

The P510e plug-in hybrid model, which has a 3.0-liter six-cylinder Ingenium petrol engine, comes with 38.2 kilowatt-hour lithium-ion battery. The car can travel about 100 kilometers on a single charge based on WLTP standards, with overall carbon dioxide emissions less than 30 grams per kilometer. It takes only an hour to charge it 80 percent. It has a maximum horsepower of 510 and torque of 71.2 kilogram-meters.

All models are equipped with Jaguar Land Rover's new infotainment system, dubbed Pivi Pro, which was developed with LG Electronics. The Pivi Pro, using Qualcomm's Snapdragon 820Am chip, is able to process multiple orders at one time without losing speed and can be remotely updated.

All cars will have the T Map navigation service, which allows voice commands.

Jaguar Land Rover Korea has not disclosed the price, but the previous model cost around 200 million won ($167,000).

Land Rover’s All New Defender is smart and rugged