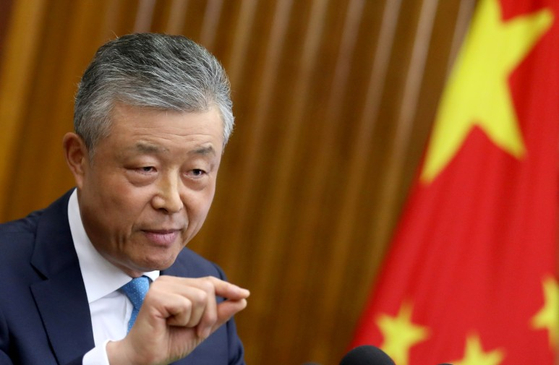 
Liu Xiaoming, Chinese special envoy on Korean Peninsula affairs, stressed the importance of Chinese-Korean-Japanese trilateral ties on his Twitter account Tuesday, in what appears to part of a growing movement by Chinese officials to tone down calls to boycott the Beijing Olympics.

“China, Japan and the ROK are close neighbors & partners,” Liu wrote in his tweet. “China-Japan-ROK cooperation meets the common interests of the three countries and is conducive to peace, stability and prosperity of Northeast Asia. China attaches great importance to the trilateral cooperation.”

Liu's statement comes as talks on boycotting the Olympics over Beijing’s human rights abuses have been gathering attention in the United States and Europe.

Last week, U.S. President Joe Biden said at the White House during a meeting with Canadian Prime Minister Justin Trudeau that he is considering a diplomatic boycott of the Beijing Olympics to protest China’s human rights violations.

For the same reason, the European Parliament had already voted in the summer to boycott the Beijing Winter Olympics.

The calls to boycott gained additional traction when Chinese tennis player Peng Shuai alleged in a social media posting earlier this month that she was sexually assaulted by former Vice Premier Zhang Gaoli. The post on her Weibo account was censored, as well as any other discussions of her allegations, and Peng has disappeared from the public eye since then.

Chinese Ambassador to Korea Xing Haiming in an interview on Monday with YTN, a local media outlet in Seoul, stressed the Olympics “should not be politicized,” adding that China is ready to welcome all sportsmen and women from around the world.

Chinese Foreign Ministry spokesperson Zhao Lijian has also been emphasizing in recent press conferences that leaders such as Russian President Vladimir Putin will be attending the Beijing Olympics.

The international movement for a diplomatic boycott of the Beijing Olympics could be a setback for those in the Moon Jae-in government working to reach a peace initiative with the North before the remaining six months of Moon’s tenure comes to an end, including its push to formally end the 1950-53 Korean War.

The Beijing Olympics was a venue that the Moon administration was hoping to maneuver to realize some of its peace initiatives and to try to get the inter-Korean and North-U.S. dialogue back on track in the spirit of sports diplomacy, something it was able to pull off during the 2018 PyeongChang Winter Olympics.

A diplomatic boycott would mean that government officials including U.S. President Biden would not attend the Beijing Olympics, though it would not prevent the athletes from competing.

Imports of Japanese goods decline by more than 23 percent