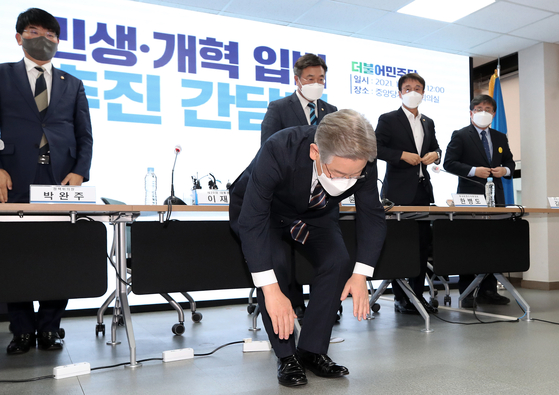 Democratic Party presidential candidate Lee Jae-myung gets to his knees to apologize for this party's shortcomings and to promise reform during a press conference at the National Assembly in Yeouido, Seoul on Wednesday. [YONHAP]


High-ranking officials within the ruling Democratic Party (DP) decided to resign en masse on Wednesday in a major party shake-up before the March presidential election.

Speaking at a press conference at the National Assembly, Secretary-General Yoon Kwan-seok said that major officials in the party collectively offered to resign with the aim of forging a new DP.

"The people are calling for our [current] Democratic Party to be born anew through greater innovation," Yoon said.

He added, "The party's election committee has already decided to commit to reform and completely reorganize in order to meet the demands of the people and our supporters."

Although Yoon said that the party has poured its efforts into overcoming the Covid-19 pandemic and supporting people's livelihoods, it was time for it to "return to its roots and take the lead" in forging unity.

"We will go back to where we started and take the lead in radically transforming the party with a spirit of unity and do our best individually to win the presidential election," he said.

Yoon said that the five party officials tendered their resignations to party leader Song Young-gil in order to "put the party before themselves."

Secretary-General Yoon cited the decision of the party's election committee to embark on a wholesale party makeover as the main reason for the officials' resignation.

The election committee appears to be taking its cue from DP presidential candidate Lee Jae-myung, who has called for a radical transformation of the party from the bottom up to more closely align with his political agenda, which includes greater public expenditure on emergency relief grants than the government and ruling party were initially willing to support.

The mass resignation also comes amid a growing sense of urgency within the party as Lee's support ratings continue to lag behind those of main opposition People Power Party candidate Yoon Seok-youl.

Yoon appeared to be in agreement with the idea of a radical change in the DP's ranks, saying, "The DP talks about creating a 'new party,' but we are currently coming up short and people are demanding reform within the Democratic Party."

Yoon's comments appeared to be an admission that election polling played a part in the party officials' resignations, which come three days after the party's lawmakers unanimously agreed to give Lee full authority to reform the DP election campaign committee.

However, Yoon clarified that Song will stay on as the DP's chairman despite the mass resignation, saying, "The resignation of the party leader has not been discussed and is not subject to consideration."