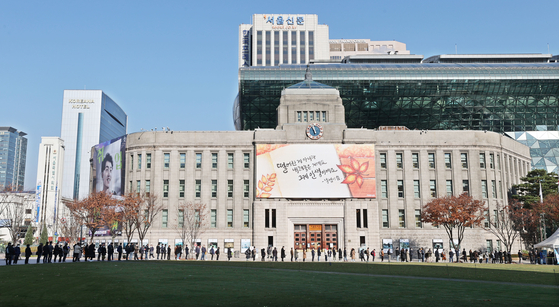 People line up at a Covid-19 testing site at Seoul Plaza in central Seoul Wednesday, after health authorities announced that Korea reached a record high of 4,116 daily cases. [YONHAP]

This was the first time daily cases surpassed 4,000 since the outbreak of the coronavirus pandemic last year. Wednesday's count was up by 1,417 patients from Tuesday.

Prime Minister Kim Boo-kyum said Wednesday that the Seoul metropolitan area needs to be ready to activate an emergency response plan at any time, highlighting the urgency of the situation.

Of the daily cases, 4,088 were local infections and 28 were imported, and the total caseload reached 425,065, according to the Korea Disease Control and Prevention Agency (KDCA).

The country saw 34 more fatalities from Covid-19, the highest number since the start of the fourth wave of the pandemic in July, bringing the death toll to 3,362.

The metropolitan area accounted for 76.4 percent of the country’s new cases, with 1,735 infections reported in Seoul and 1,184 in Gyeonggi, both new highs for the capital and the surrounding province. Incheon reported 221 cases.

The intensive care unit (ICU) bed occupancy rate in the greater Seoul area stood at 83.7 percent as of 5 p.m. Tuesday, according to the Central Disaster Management Headquarters.

The ICU bed occupancy rate in the city of Seoul was 86.4 percent, up 2.1 percentage points from the previous day.

There were 778 patients on standby for hospital beds for over a day as of Wednesday. This includes 182 who have been on standby for over four days. It also includes 374 people who are over 70.

Prime Minister Kim said in a coronavirus response meeting, “We have entered the fourth week after starting a gradual recovery of daily life. We have to review whether or not to move on to the next step or not [in relaxing social distancing measures], but the situation is more serious than expected.”

He continued, “If you look at the metropolitan area alone, we are in an urgent situation where we need to be able to review the activation of an emergency plan at any given moment.”

At the beginning of this month, Korea started the first stage of its three-phase "With Corona" policies to ease social distancing measures and allow people to return to normal daily life.

The government had hoped to enter the second stage next month, but the spike in critical cases may prevent that. 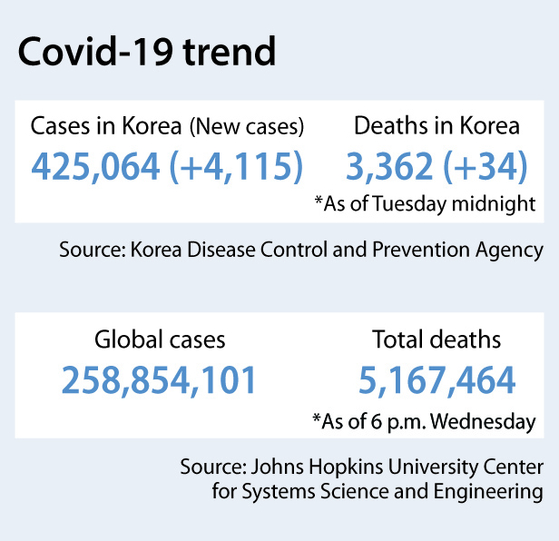 The metropolitan area has already exceeded the 75 percent ICU capacity in greater Seoul that authorities said could trigger a "circuit breaker" halting the relaxations of social distancing measures.

Kim called for efficient management of hospital beds and expanding home treatments for patients who are asymptomatic or with mild symptoms.

“Above all, it is an urgent task to restore the capacity to respond to medical care in the metropolitan area, including intensive care beds,” he said.

The government issued an administrative order to earmark an additional 267 beds in 28 large hospitals and general hospitals outside the metropolitan area.

Health authorities said they were also separately looking into designating additional beds for Covid-19 treatment in designated hospitals in the metropolitan area and expanding the number of beds for moderate cases as well.

The government had warned of a spike in cases after the start of the “With Corona” scheme, but the number of critical patients has increased beyond expectations.

Sohn Young-rae, a senior epidemiological strategist at the government’s Central Disaster Management Headquarters, said in a press briefing Wednesday, “The increase in the number of critically ill patients is significantly higher than the predicted range.”

The KDCA said that the 24-week pregnant woman was diagnosed with Covid-19 on Nov. 18 and delivered the stillborn baby prematurely Monday.

A total of 42.32 million people, or 82.4 percent of the population, received at least their first Covid-19 vaccines shots, and 40.63 million people, or 79.1 percent, have been fully vaccinated. Over 2.1 million people have received booster shots, which have been sped up for the elderly, the sick, people in their 50s, soldiers, police and firefighters.

For people over the age of 59, patients and employees at nursing hospitals and other social welfare facilities, employees of hospitals, and people with underlying diseases, booster shots will be given four months after their last vaccine jab instead of six months.