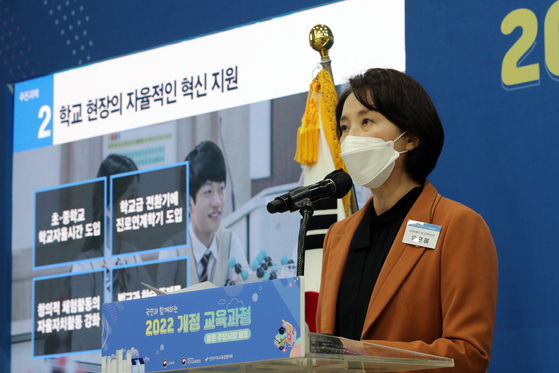 
The Ministry of Education introduced an ambitious three-year plan to upgrade the nation's public education, which has struggled for the last two years due to Covid-19.

The plan, which will be finalized early 2022, will be carried out in elementary schools in 2023 and in middle and high schools the following year.

The plan calls for software and artificial intelligence courses in elementary,, middle and high schools.

Because digital knowledge will be a basic necessary skill for students following the so-called fourth industrial revolution, elementary school students will be introduced to various technologies through games and other hands-on activities. From middle school and onwards, students will take introductory AI, software and other technology-related classes.

The current mandatory set of courses will be replaced with an electives program for all three schools as well, according to the ministry’s plan.

Schools will be able to choose which electives they want to offer by taking suggestions from students and parents.

High school students will be most affected by the new electives program as it will be introduced with a credit-based evaluation system.

Already in use in other advanced countries such as the United States and Canada, a credit-based evaluation system allows high school students to organize their entire academic course schedule depending on their interests and career path.

Accordingly, current requirements in core subjects such as the Korean language, English, and mathematics will decrease.

Class hours will be slashed as well.

Currently, students complete a total of 2,890 hours during their three years of high school. From 2025, under the revised outline, students will complete 2,720 hours.

The reduction of school hours is the first in 13 years.

The younger students have more changes coming to their school programs as well.

First and second graders’ curricula will include gym classes in order to increase the amount of physical exercise for young children.

For sixth, ninth and twelfth graders who are in line to transition into middle school, high school or university, transition classes will be mandatory to help them.

Those classes will take places during second semesters.

The classes will consist of career counseling and adjustment skills for new environments. Ninth graders preparing to enter high schools will learn about the credit system and how to best utilize it.

The ministry hinted at alterations to the university admissions process.

“We have begun talks about changes to the university system and whether the College Scholastic Ability Test (CSAT) will continue or not, but nothing has been made final,” said an official from the ministry.

“We believe the ministry will have more answers in the coming years, after the 2022 presidential elections.”