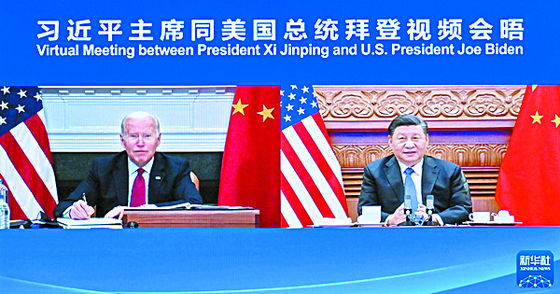 YOU SANG-CHUL
The author is the head of the China Institute of the JoongAng Ilbo.

Democracy or tyranny? It is a phrase that U.S. President Joe Biden uses whenever he wants to blast Chinese President Xi Jinping. In February, Biden said that there was nothing democratic about Xi. In April, he summed up that U.S.-China relations was a matter of democracy and tyrannical politics, and he is inviting 108 countries on Dec. 9 and 10 to the “The Summit of Democracy.” He is forming a worldwide anti-China bloc. Xi is not going to stay calm. He is advocating “Chinese democracy” so that the Western world cannot beat down China with “democracy.”

Xi is attacking “Western democracy” first. He claimed democracy was not patented and that it is not a true form of democracy if it gets attention when people vote and ignored after the election. Also, Xi said that it is important to get consent in the process of the election, but what’s more important is how much of that consent is realized. He advocates Chinese democracy. According to him, the shape of Chinese democracy is the People’s Congress, and the content is “people’s democracy in the entire process.”

It’s true that modern democracy has many problems and needs to be supplemented. But can Chinese democracy be an alternative? Most of all, the reality is different from what China says. A Chinese human rights activist who defected to the U.S. said Xi just insisted that democracy also exists in China. Another activist said it is China’s reality that he couldn’t even get into the People’s Congress office.

Most of all, there is no freedom of the press in China. Chinese media say their last name is “[Communist] Party.” Anyhow, Xi is raising the banner of Chinese democracy and is about to engage in a long battle with the West over the right to interpret democracy. This fight will have a great impact on the fate of humanity. As Korea has been invited to the Summit of Democracy next month, it will be interesting to see how Korea approaches it.