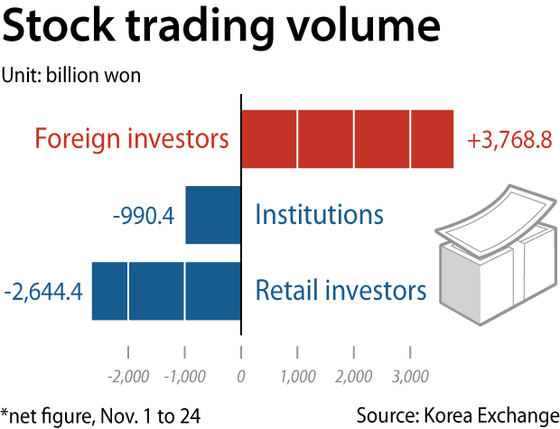 The won is weakening against the dollar, but foreign investors are still buying Korean shares amid positive outlook for local chip stocks.

The local currency traded at 1,186.5 won against the dollar on Wednesday, weakening 17.8 won, or by 1.5 percent from Oct. 29. Foreign investors have to exchange their local currency to the won to buy and sell Korean shares, and many tend to exit the market as the won value falls. However, they net bought 3.77-trillion-won worth of shares from Nov.1 through Wednesday.

The figure is dramatic turn from the 2.6 trillion won net sold during the previous month from Oct. 1 to Oct. 25.

“They will face a foreign exchange loss if the won trades near the 1,250 won per dollar level like it did in during the early stages of the Covid-19 outbreak last year, but it won’t go above the 1,200-won-mark unless a big risk arises,” said HI Investment & Securities analyst Park Sang-hyun. “It seems that foreign investors think the won value will slightly rise, and that they could enjoy foreign exchange gains.”

The dollar is strong, but influencing factors don't affect foreign investors in Korea as much.

The U.S. Dollar Index — which measures the dollar value to six major currencies — went up to 96.938 on Wednesday, the strongest since July last year. However, foreign investors aren’t selling stocks as the appreciation isn’t triggered by a sluggish economy abroad or the rising preference for low-risk assets.

Reasons such as inflation, possible upcoming U.S. tapering and the weakening euro due to the spread of Covid-19 in Europe are the main driving factors.

Many have been drawn to purchasing chip stocks as a positive outlook for the industry was mapped out.

DRAM prices were projected to continue to fall at a sharp pace, but Citigroup analyst Christopher Danely announced last week that a pricing correction in the DRAM market is drawing to a close. The analyst added that there is increasing demand for DRAM memory among PC makers as well. Evercore ISI analyst C.J. Muse said last week that DRAM price decline expectations are diminishing.

“The news that Taylor, Texas was selected as the site for the Samsung Electronics chip factory made many investors think that the worst has passed for the chip industry,” said Shinhan Bank researcher Baek Seok-hyun.

“Foreign investors could have perceived local chip stocks to be cheap, and considered it a good time to buy the dip,” said Jung Yong-taek, head of the research division at IBK Investment Securities.

Although foreigners are pumping money into the Korean stock market, whether the trend will carry through to non-chip companies is uncertain. Samsung Securities analyst Jeong Myung-ji said it is possible foreign capital will continue to flow specifically into chip stocks, but foreign net buying may not become more broad.

“Foreigners are no longer dumping stocks, but now trading Korean company shares following the rectangle pattern,” said Jung. “If economic risk from China is eased, foreign investors will then start their buying spree.”