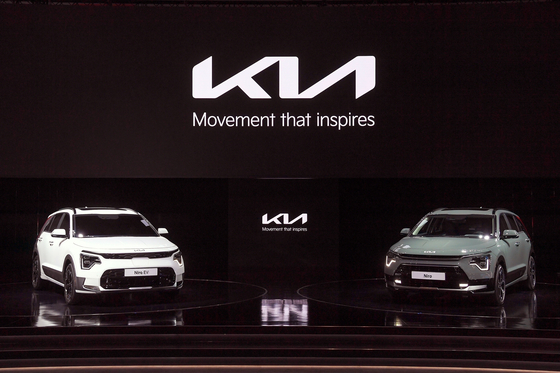 GOYANG, Gyeonggi – The Seoul Mobility Show this year is focused on electric models that will soon be on Korean roads rather than displaying extravagant concept models that have a slim chance of making it to production.

The scale of the show was significantly smaller than the 2019 show, with fewer carmakers and mobility companies participating.

Renault Samsung, GM Korea, SsangYong Motor were no-shows and Tesla, which was present in the previous show, was also absent.

A total of 100 companies from six countries participated in the mobility show, 10 of which were automakers.

In 2019 show, 20 automakers participated. The 2020 show was cancelled due to the pandemic.

There was a single world premiere, from Kia: a fully revamped version of the Niro SUV, which is available in all-electric and hybrid versions.

Badged with the new Kia emblem, the grille is much slimmer and wider than on previous models. The charging socket, which is usually located on the side of the vehicle, has been moved to the center of the face right below the grille to make charging more convenient, according to the carmaker. 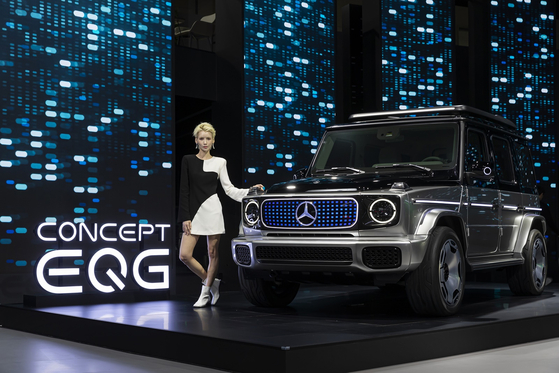 In the back, there are vertical taillights, which according to Kia look like boomerangs.

“Sustainability-conscious consumers will like the practical, high-tech and spacious new Niro,” said Karim Habib, Kia’s design boss, at a press briefing at the motor show on Thursday.

The hybrid Niro will be available in first quarter of next year followed by all-electric Niro, also in the first half.

Mercedes-Benz Korea brought five new electric models to this year's mobility show, some of which will be available soon, while the rest need more time.

The luxury German automaker rolled out the EQS sedan, the electric equivalent of the top-of-the-line S-Class sedan. 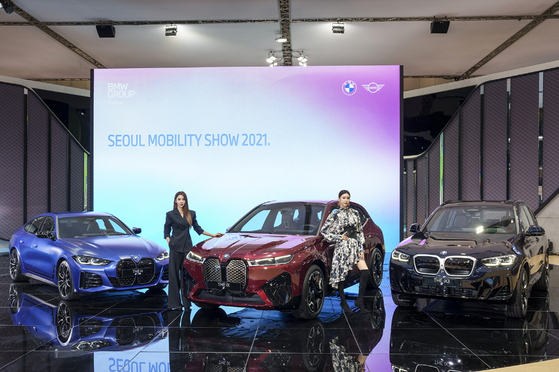 The EQS, which runs on a gigantic 107.8-kilowatt-hour battery, is able to go 478 kilometers on a single charge, according to Korea’s Ministry of Environment.

Mercedes also showcased the EQB, the electric equivalent of the GLB midsize SUV.

Three electric models were having their Asian premiers: the EQE, the AMG EQS 53 4Matic and the concept EQG.

The AMG EQS 53 4Matic, which is the first electric model from the Mercedes high-performance AMG sub-brand, can go 0 to 100 kilometers per hour in 3.8 seconds.

The concept EQG, one of the most eye-catching models at the show, is an electric version of the brand's G-Class offroader. The front is badged with an illuminating three-pointed star emblem in the middle of the grille-resembling LED panel. The back has an extra storage box attached where the spare tire used to be. The box is illuminating with LED lights on the edges and is supposed to carry charging cables, according to the carmaker.

Of the 17 models on display at the BMW booth, which also included the Mini and the Motorrad motorcycle brands, five of them were pure electric models.

BMW’s electric models were the iX, iX3 and the i4. The iX and iX3 SUV models just went on sale in Korea, while the i4, the pure-electric midsize coupe, is pending.

Mini presented the three-door Mini Electric to Korea for the first time, and Motorrad brought the electric scooter to the show.

With the slogan “Greetings From the New Future,” Hyundai Motor focused on explaining the driverless RoboRide service, which will begin pilot tests on Seoul roads from early next year with the Ioniq 5s.

RoboRide vehicles will run with Level 4 autonomous driving technology, where the car is able to drive on its own and make decisions in most circumstances without input from the driver.

In a video released Thursday, the partially autonomous Nexo SUV, which did not have a driver, was able to read traffic lights and change two lanes at once detecting the surroundings on its own. It also was able to slow down when a car in the next lane was too close or bikes and pedestrians approached.

The Korean automaker also revealed plans to begin selling the Ioniq 6 all-electric sedan in Korea next year as well as an electric bus and a fuel-cell bus.

The mobility show starts today at Kintex in Ilsan, Gyeonggi and runs through Sunday. 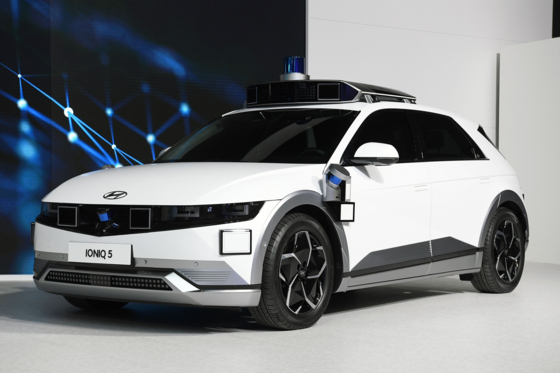