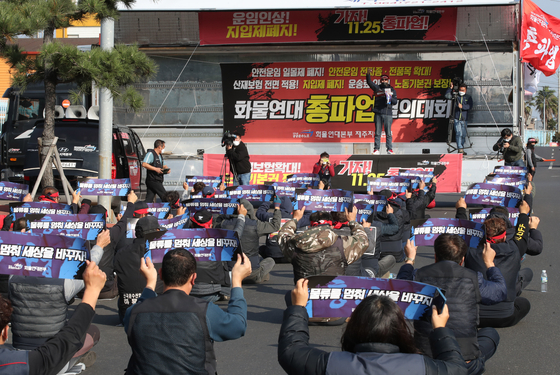 Members of the Korean Public Service and Transport Workers’ Union strike at a port in Jeju on Thursday. [YONHAP]

While the action by about 20,000 drivers of large trucks has the potential to threaten the movement of key materials, the government prepared additional vehicles for the strike.

It will only be a problem if they block the gates of ports and distribution centers, which they have said they might do.

The cargo delivery workers on strike belong to the Korean Public Service and Transport Workers’ Union (KPTU). They drive trucks that can carry at least five tons of goods. These truck drivers are mostly independent workers.

The KPTU belongs to the Korean Confederation of Trade Unions.

Demands from the truck drivers, who said they are striking through Saturday, include: wage increases; workers’ compensation insurance to all cargo truck drivers; and extending a system that requires cargo owners pay certain freight charge to truck drivers.

The freight charge system became effective in January last year, but is scheduled to end in 2022. Truck drivers are demanding the government extend the program.

Only truck drivers delivering containers, steel products or cement get workers’ compensation insurance, according to a spokesperson for the KPTU.

In response to the action, the Ministry of Land, Infrastructure and Transport said on Wednesday that it prepared emergency trucks to respond to the possible disruptions.

The ministry said that it will add 100 container trucks at ports or warehouses in accordance with the needs. It is also giving permission to owners of large trucks to deliver cargo through Saturday after submitting an application to work at a nearby city hall.

“We plan to minimize disruptions of distributions both inside and outside of Korea during the strike by making full use of all possible measures,” said a spokesperson for the ministry.

“Since the strike was announced before it kicked off, [the government] already prepared to respond to the possible supply disruptions and preemptively handled urgent matters,” said an industry insider. “But problems could arise if they block the gates at ports or distribution centers.”

Truck drivers belonging to the union only account for five percent of the individuals driving trucks for business, according to local media reports. But many cement and container truck drivers are union members, which could cause supply-chain disruptions for those materials.