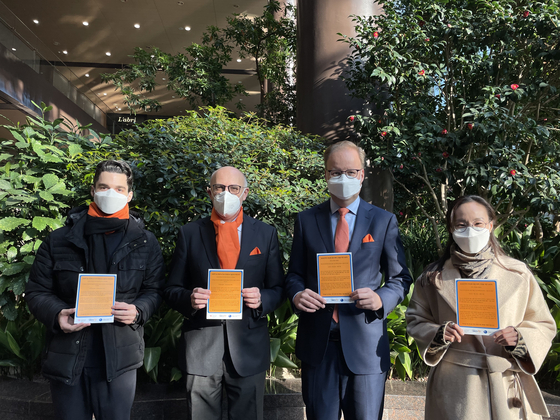 From left, Alexander Grabner, assistant attaché at the Austrian Embassy in Seoul; Wolfgang Angerholzer, Austrian ambassador to Korea; Mika Ruotsalainen, deputy head of mission at the Finnish Embassy in Seoul; and Jung Eun-sun, assistant to the ambassador at the Austrian Embassy in Seoul, take part in a campaign to raise awareness on International Day for the Elimination of Violence against Women at the Gwanghwamun Kyobo Building in central Seoul on Thursday morning, by handing out orange informational leaflets to all people entering the building. [ESTHER CHUNG]

‘Summer of joy and freedom’