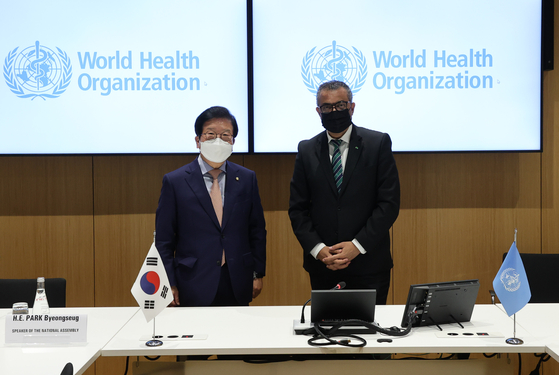 
Korea is a “strong candidate” to become a global hub for biomanufacturing training to allow countries more equitable access to vaccines, the World Health Organization (WHO) chief told National Assembly Speaker Park Byeong-seug in a meeting in Geneva on Tuesday.

WHO Director-General Tedros Adhanom Ghebreyesus said, “Korea is a strong candidate that will be one of the finalists for the global Biomanufacturing Workforce Training hub,” according to the National Assembly speaker’s office.

Park and Ghebreyesus held a 70-minute meeting to discuss Covid-19 vaccine cooperation and humanitarian aid for North Korea. The parliamentary speaker was on a weeklong trip to Europe, which kicked off Monday and took him to Switzerland and Spain.

The WHO has pushed to form global Biomanufacturing Workforce Training hubs to address concerns that low- and middle-income countries face significant inequity in terms of access to vaccines and other biologics. The hubs are expected to build biomanufacturing capacity in these countries by training personnel the skills necessary to be able to operate facilities that manufacture monoclonal antibodies, biotherapeutics and vaccines — including live, inactivated, recombinant and mRNA.

The WHO is in the process of selecting the venue for such hubs.

“Korea is equipped with the educational infrastructure and global vaccine production facilities needed for vaccine development,” said Park. “Korea also has extensive experience collaborating with international organizations to develop a workforce for the bio sector.”

He added Korea is fully equipped with the required capacity and the “optimal venue” for a Biomanufacturing Workforce Training hub.

Ghebreyesus pointed to the past two years of challenges following the outbreak of the Covid-19 pandemic and said the “WHO might not have made it to where it is today without support from Korea.”

He continued, “Korea is the strongest candidate to be selected as the final choice” for the global hub, noting that the WHO hopes to expand collaboration with Seoul.

They also discussed the role of WHO in supplying coronavirus vaccines to North Korea, and Park encouraged a visit by Ghebreyesus to Pyongyang to encourage health cooperation.

Park said, “The National Assembly and the administration in [South] Korea have a firm stance on the need to provide humanitarian aid to North Korea regardless of the political or security situation.”

Ghebreyesus responded by saying he intends to visit the two Koreas “at the same time.”

Park also asked for the WHO’s support in securing comparative vaccines, a new stumbling block to developing a homegrown Covid-19 vaccine, as a part of efforts to “supply affordable vaccines in as many countries as possible” and save time and money for clinical trials.

Park flew to Spain Thursday to attend the 143rd Inter-Parliamentary Union Assembly, where he will give a speech on challenges facing democracies.