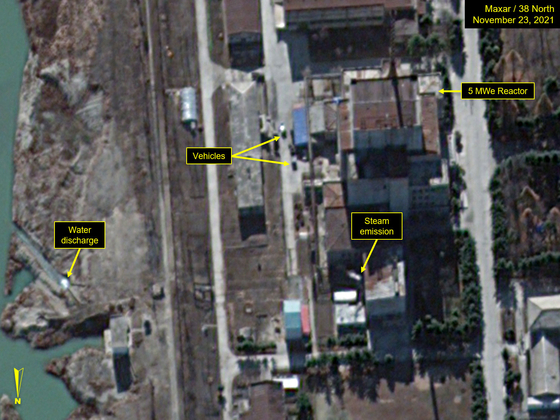 Satellite imagery analysis of the Yongbyon nuclear facility in North Pyongan shows steam emanating from a generator hall and water being discharged into the Kuryong river on Wednesday. [38 NORTH]

The images, analyzed by U.S.-based North Korea analysis group 38 North, show steam emanating from the generator hall, indicating that at least one of the facility’s generators is currently in operation.

Generators are used in nuclear plants to convert water into steam by using heat produced in a nuclear reactor core.

The images also showed water being discharged from the facility into the nearby Kuryong river, which has been caught on previous satellite imagery from as early as July.

“Since early July 2021, there have been indications, including the discharge of cooling water, consistent with the operation of the reactor,” said the report submitted to the International Atomic Energy Agency (IAEA) Board of Governors Friday, referring to the 5-megawatt reactor at the Yongbyon complex.

The 5-megawatt reactor can produce up to 6 kilograms (13 pounds) of plutonium per year. It appeared not to be in operation from early December 2018 until this past July.

38 North on Wednesday called the signs of activity at Yongbyon “notable” since the production of additional plutonium is necessary in the North Korean regime’s goal of bulking up its nuclear weapons arsenal, as announced during the eighth Korean Workers’ Party congress in January.

The website also noted continuing construction work on a new wing of the reactor facility, but added there were no signs that the facility was yet in operation.

38 North’s observations align with monitoring conducted by the IAEA, which said Wednesday that the North appears to have continued operations at the Yongbyon nuclear reactor since they recommenced in July.

The nuclear watchdog also pointed to nuclear activities at the regime’s uranium enrichment and mining facilities elsewhere to support its suspicion that the North is a building up its stock of fissile materials.

“There are ongoing indications of activities at the Kangson complex and the Pyongsan Mine and Concentration Plant,” IAEA Director-General Rafael Grossi said during a board of governors meeting Wednesday.

The Kangson facility, just outside Pyongyang, came into the spotlight after a second failed summit between North Korean leader Kim Jong-un and former U.S. President Donald Trump in February 2019. In a press conference afterwards, Trump referred to North Korea’s unreported nuclear facilities, including a uranium enrichment plant which was widely believed to be a reference to the one at Kangson.

The Pyongsan facility is a major plant that processes uranium ore into yellowcake, a type of uranium concentrate powder that is an intermediate stage before fuel fabrication or uranium enrichment.

Pyongyang's nuclear activities come during a delicate period in deciding the country’s future relations with Seoul and Washington.

South Korea and the United States are currently in consultations to negotiate a formal declaration terminating the 1950-53 Korean War to induce the North to resume denuclearization talks.

Nuclear negotiations between the U.S. and the North have remained stalled since the 2019 Hanoi summit between the two nations in Vietnam ended without a deal.