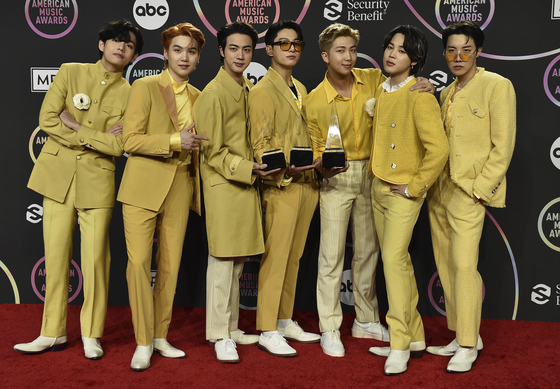 BTS poses with awards for favorite pop duo or group, favorite pop song for “Butter,” and artist of the year at the American Music Awards on Sunday, Nov. 21, at Microsoft Theater in Los Angeles. [JORDAN STRAUSS/INVISION/AP]

The question of whether the members of BTS will have to go into the military will remain open a bit longer after a legislative committee failed to reach a decision on exemptions for the superstars.

“We couldn’t reach a consensus within the committee,” a member of the National Assembly’s National Defense Committee told the press Thursday, shortly after the committee adjourned a session. “We decided to hold public hearings and other procedures to try to gain a sense of public opinion on the matter.”

They could have approved one, or created a new draft merging elements of the three proposals, and sent it to be eventually voted on by the Assembly, or rejected them, but they decided to do neither and call a public hearing, which extends the deliberation process.

Committees don't call public hearings on every bill, but they can if they deem the bill is of significant public interest. BTS's popularity ensures that, along with the fact that exemptions to military duty are a hot button issue in Korea.

Public hearings are held in the presence of experts and interest groups selected by the committee.

The military exemption bills have gotten a lot of attention as two members of BTS turned 28 this year, the deadline for military duty.

All Korean men are mandated by law to enlist between the ages of 18 and 28 unless they have extraordinary reasons, or they can face imprisonment.

Extraordinary reasons fall into two categories: having certain impairments or disabilities, or being an artist or athlete who “perform duties in the field of arts or sports to promote culture and enhance national prestige,” according to the law.

But the exemption for artists is only for those specializing in classical music, ballet and a traditional music of Korea known as gugak. Exemptions are only given to artists who win one of 28 international classic music competitions, nine international ballet competitions and five national competitions for gugak and ballet.

This rules out K-pop artists like BTS, much to the distress of its fan club ARMY. Jin and Suga are the members who turned 28 this year, and the other five aren't far behind.

There was an amendment to the law last year that allowed pop stars to delay enlistment to age 30, but ARMY and even some dispassionate people have been calling for a total exemption.

The National Defense Ministry, shortly after the committee adjourned on Thursday, said through a spokesperson that the matter needs careful deliberation.

“We have to take into account the current circumstances, like the drop in population, when revising the Military Service Act,” said Boo Seung-chan, spokesperson of the ministry, during a press conference on Thursday afternoon.

“We need to reach a consensus on the matter […] and need to be careful when deliberating whether to expand the category of artists and sports personnel [who may be allowed exemptions].”

Famed individuals who have been exempted from the military service include footballer Son Heung-min and pianist Cho Seong-jin.