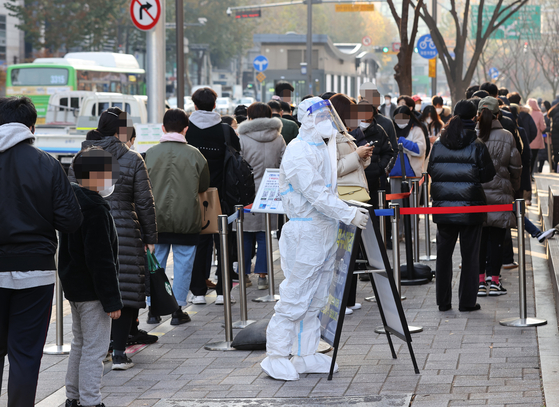 People wait in line to get tested for Covid-19 at a public health center in Songpa District, southern Seoul, on Thursday. [YONHAP]


The government warned that it is considering stricter public health measures as Korea reported the second-largest daily Covid-19 tally on Thursday.

The country registered 3,938 new Covid-19 cases Thursday, of which all but 21 were locally transmitted, raising the total caseload to 429,002, the Korea Disease Control and Prevention Agency (KDCA) said. Daily cases dropped by 177 from the previous day, when they hit an all-time high, but reached the second-largest figure since the pandemic began.

The government said the recent surge in cases is “beyond their expectations” but also said it was "keeping all options open."

Critical cases hit a record for the third consecutive day with 612 patients battling for their lives as of Wednesday midnight. Among them, 520 patients, or 85 percent, were people in their 60s or older.

Thirty-nine more people died from the virus, all but one aged over 59. That was also the second-largest number since the start of the pandemic. The country’s death toll now stands at 3,401.

The occupancy rate of intensive care units (ICUs) in the greater Seoul area stood at 83.9 percent, including 85.5 percent in Seoul, 82.7 percent in Gyeonggi and 81 percent in Incheon — with only 112 beds left available. The overall ICU occupancy rate nationwide was 69.4 percent.

A government-private sector committee in charge of a roadmap for the post-pandemic transition to normalcy held its fourth meeting on Thursday morning. The committee, jointly chaired by Prime Minister Kim Boo-kyum and Choe Jae-chun, distinguished professor of EcoScience at Ewha Womans University, discussed various measures to cope with the current situation.

“The pandemic situation is worsening without even being able to feel the warmth [of the gradual return to normalcy],” the Prime Minister said during opening remarks. “There may be opinions that we should immediately take back our difficult first step toward the return to normalcy.”

Son Young-rae, a senior epidemiological strategist at the Central Disaster Management Headquarters, told reporters that tougher measures are “under discussion” but the government was “keeping all options open” at this point, including putting back social distancing rules.

Regarding the emergency plan of halting the “With Corona” strategies, Son presented the plan’s four policy directions, including an expansion of the so-called quarantine pass system (presenting a vaccination certificate or a negative Covid-19 test result); adoption of social distancing measures such as limiting business hours and social gatherings; protection of high-risk facilities; and expansion of the medical system.

However, some point out that the emergency plan isn't very promising since most of its aims, with the exception of stricter social distancing measures, are already in place or set to be implemented.

In addition, health authorities admitted that it is difficult to earmark additional hospital beds for Covid-19 patients as the medical response capacity is “nearly exhausted” in the greater Seoul area.

“Each hospital has currently allocated the maximum number of beds within the capacity of their intensive care systems,” Son said. “It won’t be easy to allocate additional beds in the ICUs beyond the previous administrative orders.”

As the elderly and unvaccinated people are taking the lead in the recent rise of hospitalizations and fatalities, health officials once again urged people to get Covid-19 booster shots.

An assessment of the current pandemic situation and preventive measures will be announced Friday after being discussed at the government’s Central Disaster and Safety Countermeasure Headquarters meeting.

Education officials advised teenagers to get vaccinated, noting that infection rates among minors under 19 have recently outpaced those for adults.

According to an analysis by Choi Eun-hwa, a professor at Seoul National University and chair of the Korea Advisory Committee on Immunization Practices, over the four weeks from Sept. 26 to Oct. 23, 99.7 in every 100,000 people under 19 were infected with Covid-19 compared to the 76 people for the age group of 19 or older.

While vaccine passes are only needed by adults when entering places where the virus could spread more easily, such as nursing homes, indoor sports facilities, bathhouses, and clubs and bars that allow dancing, authorities are looking into expanding the pass mandate to restaurants and cafes. In addition, they are planning to implement the system for people under the age of 19 in places frequented by teens such as in noraebang (singing rooms).

“In order to protect the safety of students and schools, the Education Ministry will closely consult with the KDCA to provide sufficient opportunities for children and adolescents to be vaccinated,” Education Minister Yoo Eun-hye said Thursday.