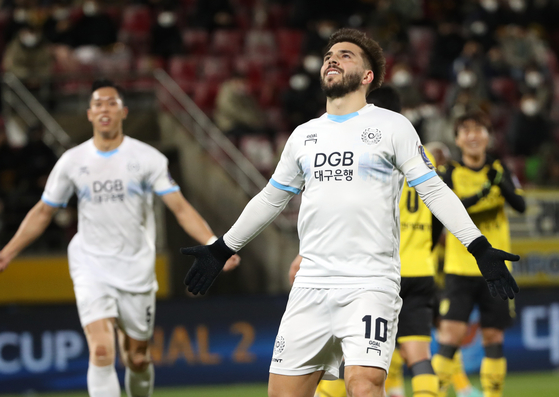 Daegu FC's Bruno Lamas celebrates after scoring a penalty in the first leg of the FA Cup final against the Jeonnam Dragons at Gwangyang Football Stadium in Gwangyang, South Jeolla on Wednesday.


Daegu FC beat the Jeonnam Dragons in the first leg of the FA Cup final on Wednesday, taking a 1-0 win on the road at Gwangyang Football Stadium in Gwangyang, South Jeolla.

It was Jeonnam, not Daegu, who looked more likely to score for most of the rest of the game, continuing to push toward the goal but failing to get anything across.

With a 1-0 lead on the road, Daegu now just need to hold on for the second leg of the final, to be held on Dec. 11 at DGB Daegu Bank Park in Daegu. The aggregate score decides the winner with the away goals rule is in effect, which could play to Jeonnam’s advantage if the second leg is a higher-scoring game.

Jeonnam entered the FA Cup final as significant underdogs with a tough goal: To become the first K League 2 side ever to lift the cup.

The 1-0 loss in the opening leg may not be the best start, but the fact that Jeonnam kept the game so close suggests that the K League 2 giant killers may still have some tricks left up their sleeves.

En route to the final, Jeonnam defeated Ulsan Hyundai — at the time the No. 1 club in the K League 1 — in the semifinals.

Jeonnam were the only lower-ranked team to reach the semifinals of the FA Cup. The South Jeolla club has had a fairly average season, with 13 wins, 13 draws and nine losses this season for fourth place. In the FA Cup, however, Jeonnam are now chasing history.

Jeonnam have won the FA Cup three times, in 1997, 2006 and 2007. On all three occasions, the club entered the tournament from the K League 1, where the Dragons played until 2018. No K League 2 side has ever won the FA Cup, although K3 League club Daejeon Korail FC did reach the final in 2019.

Daegu entered the FA Cup final as far more likely silverware candidates. The club, currently third in the K League 1, have only won the cup once, but it was recently — Daegu beat Ulsan in the 2018 final.

For Daegu, winning the FA Cup is also the easiest route to next year's Champions League. At third in the K League 1, Daegu face an unassailable gap separating them from Ulsan and Jeonbuk Hyundai Motors and the FA Cup title is the only certain route to the continental tournament.