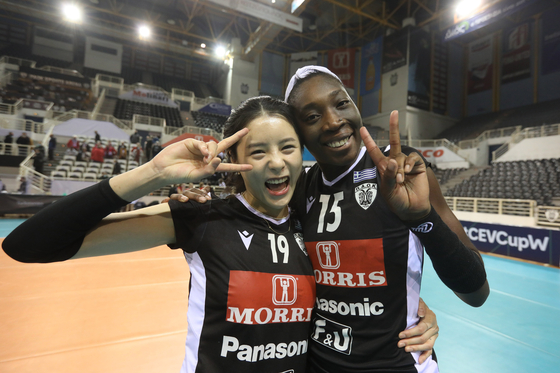 
Greek club PAOK Thessaloniki beat Belgian club Asterix Avo Beveren 3-2 on Wednesday to advance to the Round of 8 of the CEV Cup, the second biggest competition for women's volleyball in Europe, with Lee Da-yeong adding two points during the match.

PAOK Thessaloniki plays in the Greek first division volleyball league, the A1 Ethniki. The A1 season started on Oct. 9 and will continue until next March with the continental CEV Cup matches running at the same time. On Wednesday, Lee Da-yeong played the first, third and fifth sets against Belgian club Asterix to add two points.

Lee Da-yeong flew to Greece to start playing for PAOK alongside her twin Lee Jae-young on Oct. 16. However, Lee Jae-young returned to Korea on Nov. 12 to receive medical treatment for a knee injury after briefly joining the club.

The sisters left Korea's V League after being embroiled in a scandal in February when a former middle school teammate of the pair accused them of being bullies when in school, listing 21 specific allegations including claims that one of the sisters threatened her with a knife. The Korean national team and their V League club indefinitely suspended the pair and also banned them from ever holding coaching positions.

As effectively free agents, the sisters received an offer from PAOK Thessaloniki, but required an International Transfer Certificate (ITC). An ITC can be granted only by the Korea Volleyball Association or Fédération Internationale de Volleyball (FIVB) under the assumption that all parties; the players, the original club, the potential club and the association, agree on their transfer.

The Korea Volleyball Association refused to issue the certificate, quoting rules regarding international transfers that prohibit any players who have conducted violence, sexual harassment, manipulated game results or evaded military service from playing overseas. However, the FIVB didn't accept that justification and issued an ITC for the pair.

PAOK will play their next league match against Porfyras Volley on Nov. 27 and will face CSM Volei Alba-Blaj of Romania for their next CEV Cup match on Dec. 8.