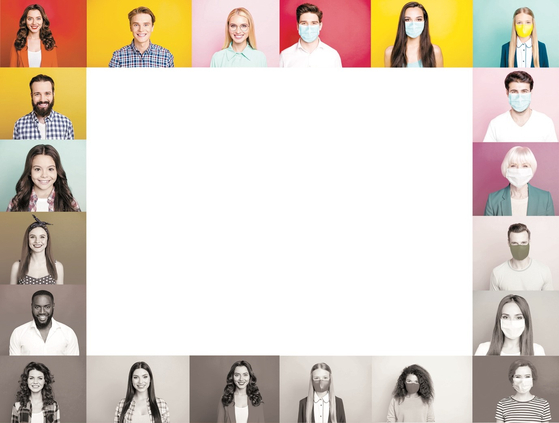 After a year under wraps, baring all can prove quite stressful

Hannah Lee, a 21-year-old university student, has always been a social butterfly.

Going out to her favorite restaurant and meeting new friends is a typical weekend for Lee. Dealing with social anxiety was never an issue — until June.

Lee, who interns at a pharmacy in Seoul, was preparing to go to a business lunch with her co-workers. It was a big day for her, especially because this would be the first time her coworkers would see her without a mask. Nervous but hopeful, she put on her mask and made her way to the designated meeting location.

She walked inside the restaurant with confidence. Lee sat down and took off her mask. She put on a big smile and greeted her colleagues. Just then, one of her male coworkers stared at her with a confused look.
Puzzled, Lee asked, “Is something wrong?”

“Hannah, you look different than I expected,” the coworker said.

In shock, Lee slowly pulled her mask up.

“I was never a socially anxious person, [but] taking off my mask has become daunting,” Lee told the Korea JoongAng Daily.

After the incident, Lee explained that she developed a form of self-consciousness about the lower half of her face.

It has been over a year since the mandate to wear masks was set in stone in Korea. Initially, wearing masks mainly served to protect people from the virus. However, as wearing masks became the norm, some people say they have become acclimated to concealing their face beneath the piece of cloth.

Terms such as “taking off masks” and “social anxiety” are now often associated together on the internet.

Articles that explain how to cope with social anxiety without a mask are beginning to surface on search engines.

A study conducted by the University of Waterloo in Canada found that individuals who struggle with anxiety disorder have concerns about how others may perceive their physical appearance without their masks.

Baek Go-eun, 22, a university student in Incheon, knows those concerns all too well.

“After hearing some people tell me that I look different without my mask on, that is when I started to feel more anxious,” said Baek, mentioning that she never experienced social anxiety prior to wearing masks.

“When you have a mask on, there are fewer things to consider when talking to a person. There is less judging because there is less to judge,” Baek said. “Wearing a mask is similar to wearing a blanket during a scary movie. You feel safer and less exposed.”

Vias Nicolaides, a business professor at George Mason University Korea in Incheon and a former senior consultant for the U.S. Army Research Institute for the Behavioral and Social Sciences, said there is a psychological reason for this unexpected anxiety.

When interacting with other people, Nicolaides said, “we often need to engage in emotional regulation, a psychological process where we manipulate and regulate our emotional [...] expressions in socially acceptable ways.”

A mask can act as an indirect barrier and allow others to be less conscious of the persona they display in public. Because most of our facial expressions are expressed through the bottom half of our face, people feel less obliged to create a socially acceptable facade in public and can be more honest with their facial expressions.

“One could argue that in some situations, wearing a mask can be rewarding and desirable to the extent that it allows one to conserve some of the energy the emotional regulation process inevitably depletes,” Nicolaides said.

Despite some benefits of wearing a mask in social settings, other people who spoke to the Korea JoongAng Daily said they can’t wait to take them off.

“Revealing your face is a significant factor in strengthening a relationship and your impression aids in distinguishing your characteristic as well,” said Choi Sun-jin, 20, a university student. “But the mask blocks all these things, which makes it hard for people to build new relationships.”

Kim Won-jeong, who enjoys working out at the gym, can’t wait to take his mask off, too.

“Wearing masks is torture and strongly deteriorates the flow of exercise,” Kim said.

GEORGEMASON2021 Not everyone is ready to de-mask

Is popcorn to blame? (KOR)

A nation of big brothers (KOR)

A nation of big brothers