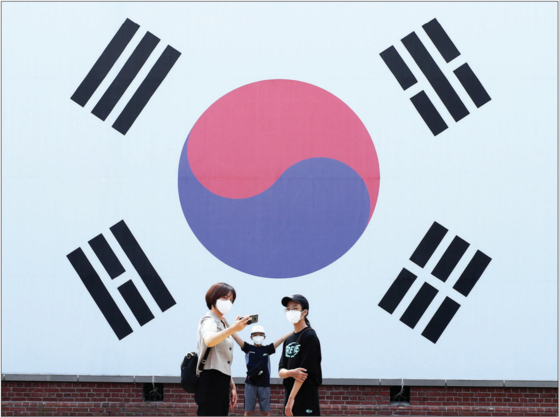 People take a photo in front of a large Korean flag at Seodaemun Prison History Hall in western Seoul, ahead of this year’s Liberation Day on Aug. 15. [YONHAP]


"I am looking forward to the 76th Anniversary of liberation day because many people are able to participate in the online event regardless of their region," said Lee Ki-gon, an official at Seoul National Cemetery. "Before the Covid-19 outbreak, most of the participants were residents and bereaved families near the cemetery."

Due to the prolonged pandemic, there have been concerns about celebrating the upcoming 76th anniversary of the National Liberation Day of Korea on Aug. 15.

Despite the concerns, it looks like more people across the country will actually be able to celebrate Liberation Day, as unlike last year, when events were canceled, this year's events will be held online.

Before the Covid-19 outbreak the Seoul National Cemetery only hosted offline events, such as tours of the cemetery and the relics kept there. 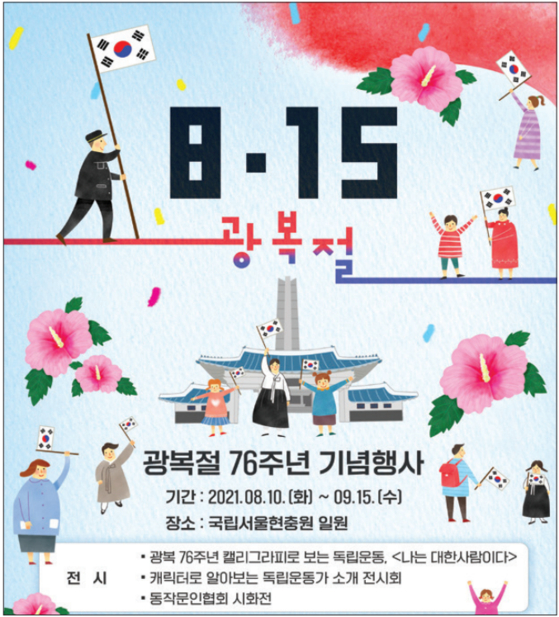 
However, for this year's Liberation Day, Seoul National Cemetery has organized six events, three online and three offline, two which are outdoor events to ensure that people remain safe during the pandemic.

One of the main online events is the "Nara Sarang Board game", where two elementary students and an adult can form a team to participate. The premise of this game is to be the first one to reach the end of the board by correctly answering questions about Korea's well-known independence activists.

Online registration for participating in the game runs from July 23 to Aug. 15, just before the game begins at 1 p.m.

The game will be live streamed via Zoom, and winners, from first to fourth place, will receive a small prize and a memorial medal.

"Familiarizing people with the 28 characters that are buried in the cemetery and reminding people of independence-related events is the main goal for this event", said Lee.

For those who wish to commemorate Liberation Day with classical music, the Seoul Philharmonic Orchestra will provide an online concert at 7:30 p.m. on Aug. 15. The concert will be performed at the outdoor stage at Seodaemun Prison History Hall, a prison built by Japan in Seoul during the Japanese colonial period.

According to the orchestra, it has been holding the Liberation Day concert since 2006 inside concert halls, but last year's concert was canceled.

Not only the song, but also the venue of the performance is drawing attention.

Seodaemun Prison History Hall is a symbol of resistance to Japanese colonial domination and the independence movement. The Seoul Philharmonic Orchestra intends to convey the sense of independence at that time by holding the event at a place that contains the history of liberation.

"We thought a lot about how to deliver a vivid sense of realism to the audience during a non-face-to-face event," said an official from the orchestra.

There's also an opportunity to mark Liberation Day with a bit of exercise.

An online fun run titled "2021 Virtual 815 Run" has been organized by singer Sean and Habitat for Humanity Korea to support the descendants of Korea's independence activists.

The run is being held throughout August.

Kakao Together, which is participating as a sponsor, said it will donate 815 won ($0.70) for every post, donation, or comment about the run. Currently, 17,515 people including celebrities such as singers Sean, Lim Siwan, Choi Si-won and actor Lee Siyoung are participating in the campaign.

"I think it's significant to be able to participate in a meaningful campaign to support descendants of the independence patriots," said Kang Seungwon, the general manager of Kakao Together. "I hope it will be an opportunity for many people to experience the joy of donation."