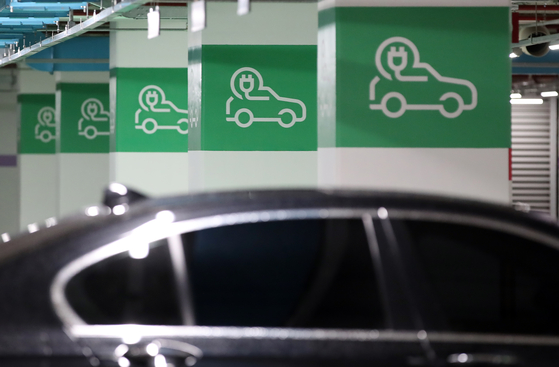 A car gets juiced up at an electric vehicle charging station in Gangnam, southern Seoul. [YONHAP]


Korea's shift to electric vehicles (EVs) poses a threat to thousands of workers in the auto industry.

EVs are simpler to design and engineer compared to cars with internal combustion engines. That leads to a simple if grim formula: the more EVs that are sold in Korea, the faster the shrinkage in jobs at auto companies and auto parts makers.

“The number of auto parts needed to make an EV is only a third of that needed for a car with a traditional engine," said Kim Yong-won, an executive at the Korea Automobile Manufacturers Association, during a symposium in Gwangju on Nov. 18. "so it is inevitable that the number of employees in the auto industry will shrink by 20 to 30 percent.

In Korea, a total of 71,006 EVs were sold in the first nine months of this year, up 96 percent compared to same period a year earlier. EVs accounted for 5.5 percent of all car sales in Korea, just behind China and some European countries, according to data provided by the Korea Automotive Technology Institute.

Hyundai Motor and Kia announced that they will not sell internal combustion engine vehicles from 2040 onward. Hyundai’s luxury brand Genesis said all its vehicles will be purely electric starting in 2025.

According to a recent Korea Automobile Manufacturers Association survey of 185 auto parts makers, 68.2 percent of respondents said they expect a sharp decline in sales as a result of the country’s move into EVs. The association's members are suppliers to Korea’s five major car companies: Hyundai Motor, Kia, GM Korea, Ssangyong Motor and Renault Samsung Motors.


Global auto makers are already reducing the number of their employees in factories.

Renault Group recently announced that it will cut the number of employees who work in the internal combustion engine car sector by 2,000 by 2024. The French car maker cut 14,600 people last year.

German auto maker Volkswagen in March reduced the number of employees at its manufacturing sites by 5,000. Reuters reported that the cuts were partly made to redirect investment to EVs. General Motors cut 14,000 employees last year while BMW cut 16,000.

Analysts say the government should be prepared with some measures to help people who are likely to lose their jobs.

“The government must see the reality more clearly,” said Kim Pil-soo, an automotive engineering professor at Daelim University. “It is urgently needed for the government to come up with some programs to train current employees, as well as foster new talent.”

“The jobs in the automobile industry of the future will be very different from now, so the government should exert all efforts to train existing employees so that they can be engaged in new businesses in the future,” Park said.