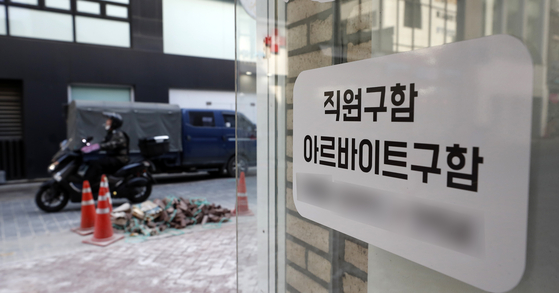 A sign at a restaurant in Myeong-dong, central Seoul, says it is looking for a part-time worker. [NEWS1]


Lee Sang-doo, 57, runs a makgeolli joint in Seodaemun District, western Seoul, and these days she does everything by herself: serving the fermented rice drink, cooking small dishes, and manning the till.

Lee has tried her best to hire part-timers to help her out, but had no luck.

“When it’s too busy, I have to beg people who worked for me before to give me a hand."

Since the government’s "With Corona" policies went into effect on Nov. 1, small business owners have started to see customers return in a big way. But they are struggling to find part-time staff.

People are looking for part-time jobs, but many are reluctant to work at restaurants, cafes and bars due to the concerns over the coronavirus.

Mr. Kim, 50, who runs a bar in Jongno District, central Seoul, recently advertised for part-time workers on a job hiring site. He paid 250,000 won ($210) for his ad to get extra exposure on the site.

But no applicants responded.

“As my bar accomodates up to 200 people, it needs at least four to five workers to operate, but I only have three,” said Kim. “Customers keep making orders, but we can’t respond to them right away. Sales drop and customers are unsatisfied with the service.

“I offered people an hourly wage of 12,000 won, but no one wants to work at my bar,” Kim added. “This will be very problematic at the end of the year, when many gathering are expected to take place.”

The attitude of the part-time workforce is behind those changes.

Part-time workers are turning to works that can be done online or without contact with other people, like online tutoring and food delivery. It's not as potentially hazardous to their health.

“I used to work as a teaching assistant in a hagwon [cram school] in Daechi-dong, southern Seoul, but quit due to the pandemic,” said Bang Seong-hyeon, a 25-year-old university student. “I started as an online tutor instead.”

A shortage of foreign workers is another reason small businesses are struggling to find part-timers.

The Korean government tightened entry restrictions on foreign workers since the Covid-19 pandemic. Many people left Korea after staying four years and 10 months on E-9 visas, and too few have been allowed to enter Korea to fill their jobs.

“Vietnamese who used to work at my bar all left,” said Lee Myeong-jong, 58, who runs a bar in Euljiro, central Seoul. “It’s nearly impossible to hire foreign workers these days.”

“The labor market won’t get back to normal even if the pandemic ends,” said Kim Tae-gi, an honorary professor of economics at Dankook University. “The government should come up with some measures to offer educational help to small business owners so they can maintain their businesses in the post-Covid era.

“It is right for the government to strengthen regulations on the entry of foreign workers, but they should still leave the door open.”

Other countries like the United States are also suffering shortages of labor in service jobs. According to a Morgan Stanley poll of 12,500 Americans, one out of 10 workers in the United States are considering leaving their current jobs in the next six months and earn money through social media, e-commerce and trading platforms.

A Bank of Korea report also pinpointed that the “spread of Covid-19 pandemic and shift to digitalization will have huge negative affect on the self-employed who work in services.”