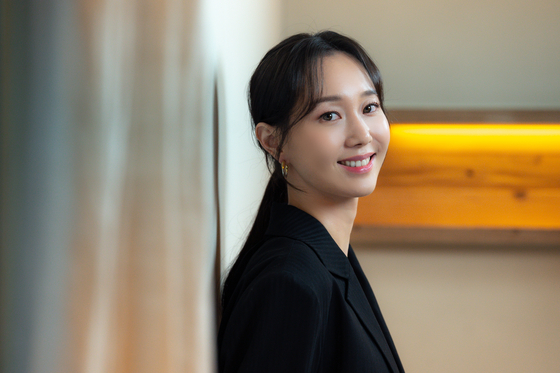 
Actor Lee You-young returned to the large screen as a “cute idiot,” as she puts it, in the film “Perhaps Love,” which hit local theaters earlier this month.

Lee has been dreaming of playing a cheerful character, and she decided to make her character — a woman who grows friendly with a high school student who lives next door — funny.

“The director said she wanted me to look like a cute idiot,” said Lee during an interview with Ilgan Sports, an affiliate of the Korea JoongAng Daily. “And I really did my best to make my character look like one.”

Her character is named Jeong-won, who is married to a successful film director. Her attempts to find work as an actor fail, and she finds comfort in a friendship with the boy next door, who is named Seong-gyeong.

The actor shared how she enjoyed working on the set, and how excited she was to finally see the final version of the movie. Below are edited excerpts.

Q. Did you like how the movie turned out?

A. The film turns out to be a cute one, just like a series of webtoons. The script was so entertaining when I read it, and the finished product was even better than I ever imagined. I knew the storyline and still laughed a lot as I watched it. I think this will be a kind of a gift to an audience that has gone through a very tough time with Covid-19.

What made you decide to take this part?

Before I decided, I met with the director. We talked about the characters, and the ideas she had for the characters were very clear. She had such a passion for each and every character, and I could sense that she was really into them. After I saw how passionate the director was, I was positive that my character Jeong-won would turn out to be someone very charming. 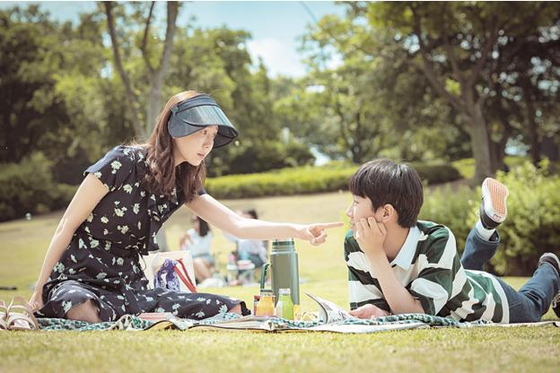 Actor Lee You-young, left, shows her cheerful and comical side in the movie "Perhaps Love." [NEW]

Jeong-won is someone who got married very early. Her husband is a film director and she dreams of being an actor. She feels very small as she knocks on every door to get auditions while her husband has a more established career. She also feels lonely because her husband isn’t very caring or verbally romantic. After a while, she gets curious about the boy who lives next door. He sits on a bench by himself every day. She becomes close with him and makes some funny scenes.

How did you make your character work?

I did my best to make my character a cute idiot. Every time she comes on the scene, she would do something to spark the curiosity of others. She didn’t have that many scenes in the movie, but she is a lovely character.

Was the relationship with the neighbor a romantic one?

I think Jeong-won must have seen her younger self when she saw that boy. I don’t think it was anything romantic, but there must have been some humane attraction as she found time spent with him entertaining and joyful.


How did you like your character in the movie?

I have wanted to try a cheerful part for a long time, and I think that characteristic came out really well. Ever since I debuted, I have taken a lot of characters that had big struggles in life. When you play such dark roles, you think about the worries your character has and inevitably you are influenced with very negative thoughts. When I played such characters, many people close to me have told me that I look too edgy and testy. They worried that I seem too into the character.

Was working on the set a cheerful experience for you?

This time, the filming was so entertaining. I had no worries and just enjoyed myself. Even on the set, all I needed to do was to chat with my acting partner Sung Yu-bin (who plays Seong-gyeong) and just have fun. That really helped me resolve any dark and negative energy that I had. Filming was really that delightful, and I think the audiences will be able to sense the joy we all felt on the set.

How was it to work with director Cho Eun-ji?

The director used to be an actor. She knows things from the viewpoint of an actor, so that was nice. Also, there was some type of sympathy we felt together deeply as actors. When she did not like the acting style I presented, she would demonstrate what she wanted herself. That allowed me to instantly understand what I had to do.

What does it feel like to be in a movie that opened right after the “With Corona” policies were adopted?

I think the new strategy inspired many people to visit theaters. I feel relieved. I hope this works as a turning point to revive the film industry, which was hit hard by the pandemic. Everyone was really exhausted. I’m happy that this movie came out now and I hope all the viewers bring home a big laugh from our movie.