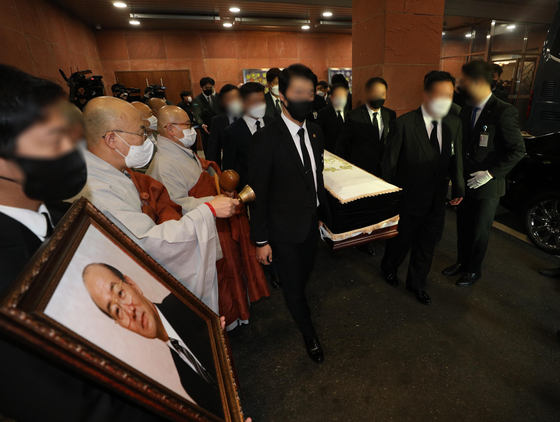 The coffin of late former President Chun Doo Hwan being moved from his funeral hall in Severance Hospital in Seodaemun District, western Seoul, to a crematorium in Seocho District, southern Seoul. [YONHAP]


The bereaved widow of late former President Chun Doo Hwan on Saturday apologized on behalf of her husband for inflicting “pain and scars” on the country.

“While I am deeply saddened by my husband’s death,” said Lee Soon-ja after the funeral on Saturday morning, "I would like to deeply apologize for my husband’s actions that caused so much pain to and scars on the country.”

She failed to specifically mention Chun’s military suppression of the Gwangju pro-democracy protests in 1980 which killed at least 165 people.

Lee’s apology was the first public statement of contrition made by anyone from Chun’s side, including the late former president himself.

The service for Chun began at a funeral hall in Severance Hospital in Seodaemun District, western Seoul, at 7:30 a.m., where his private mourning alter has been in place since his death on Tuesday.

Only 48 seats were made available at the service in adherence with Covid-19 regulations.

Five former high-ranking officials who were closely aligned with Chun during his presidency including Min Jeong -ki, Chun’s former aide, and Jang Se-dong, former head of the National Security Planning Department which conducted domestic surveillance operations under Chun, were present among the modest crowd.

Outside the morgue, about 150 right-wing Youtubers and the former president’s supporters gathered to see Chun off for the last time.

“I am devastated at the disrespectful dialogue regarding President Chun,” said a 66-year-old man outside Chun’s funeral hall surnamed Jeong.

Na Gwang-su, 62, another citizen outside the morgue, said he came because he was saddened to see a president being internationally denounced.

“I don’t usually follow politics but it was disheartening to see how poorly such an important historical figure in my country was being treated,” said Na.

When a black limousine arrived to transport Chun’s body to the crematorium, the former president’s supporters shouted phrases like, “We love you President Chun!” and “Rest in peace!”

At the crematorium in Seocho District, southern Seoul, a few supporters of Chun caused commotion, yelling that Chun’s body should be preserved and not cremated.

Chun’s place of burial has not yet been determined, so his remains were brought to his home in Seodaemun District, western Seoul, as a temporary measure.

Due to his oppressive dictatorship and lack of apology for his actions, Chun was excluded from being buried at the National Cemetery, a prestigious resting place for veterans, independence activists and prominent political leaders. He was also denied a state funeral.

About 2,000 mourners visited Chun’s mourning alter daily to pay tribute to the late former president over the past five days.

Such visits were occasionally disrupted by minor commotions with some anti-Chun protesters shouting words like words like “murderer” and “sinner.”

Former president Chun Doo Hwan, who seized power in a coup d’etat in 1979 and ordered a brutal crackdown on pro-democracy protests in Gwangju in May 1980, died Tuesday at the age of 90.

Chun was found dead on the bathroom floor of his home in Yeonhui-dong, Seodaemun District, western Seoul, after years of battling multiple myeloma, a form of blood cancer.