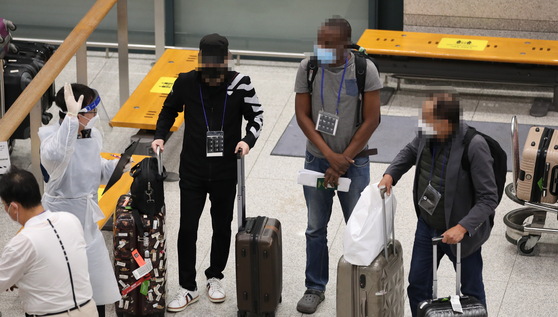 Travelers entering Incheon International Airport on Sunday, as the country closed its borders to entries from South Africa and seven other countries over Omicron variant cases. Travelers in the photo entered from Ethiopia. [YONHAP]


Korea closed its borders to foreigners flying in from eight countries in southern Africa following the discovery of the Omicron variant in South Africa.

No Omicron-variant cases have been reported in Korea so far.

“The World Health Organization [WHO] declared on Saturday the Omicron variant to be of concern, with 77 confirmed cases in South Africa of the variant, and 19 in Botswana,” the KDCA said in a statement Saturday.

Omicron was reported to the WHO on Wednesday, discovered in samples taken in South Africa on Nov. 9. The WHO noted in its statement that a large number of mutations have been observed in the variant, this raising concern that vaccines could be less effective against it.

Little is known so far about whether it is more contagious or lethal than other coronavirus variants.

Foreign nationals flying in from eight countries – South Africa, Botswana, Zimbabwe, Namibia, Lesotho, Eswatini (formerly Swaziland), Mozambique and Malawi – will be turned away either before the flights depart for Korea or upon their arrival at the Incheon International Airport.

Koreans flying in from the eight countries will be asked to quarantine at a government-run facility for 10 days, regardless of their vaccination status. They will be tested before they get on the flights to Korea, upon their arrival, on the fifth day following arrival, and before they are released on the 10th day.

Foreign nationals on long-term visas will be treated as foreigners and will not be allowed to fly to Korea under the same conditions as citizens, the KDCA said. It added that exceptions may be made for family emergencies.

Korea joined a growing list of countries, including Australia, Canada, Japan and the United States, to restrict entry from South Africa and neighboring countries. 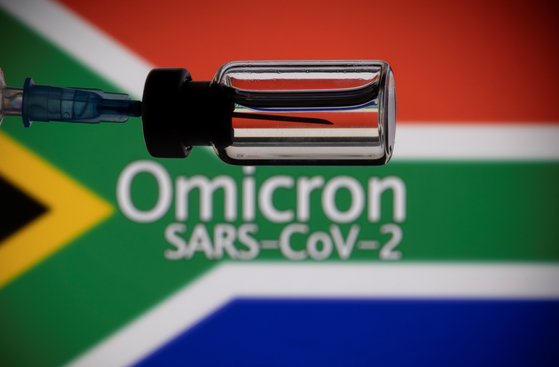 A vial and a syringe are displayed in front of a South Africa flag and the words ″Omicron SARS-CoV-2″ in this illustration published on Nov. 27. [REUTERS/DADO RUVIC]

It is the second time since February 2020 that foreign nationals have been prevented from entering the country due to Covid-19. From Feb. 4, 2020 to Aug. 10, 2020, foreigners from Hubei Province, China, were denied entry.

Even when Delta-variant cases spiked in India in June this year, Korea allowed foreigners from India to enter Korea, as long as they quarantined for 14 days upon arrival.

It remains to be seen if the country will heighten the entry threshold for travelers from the United States and Europe if the Omicron variant starts spreading rapidly in those places. As of Saturday, the Omicron variant was reported in Britain, Germany, Italy, Belgium, the Czech Republic, Denmark and the Netherlands.

Anthony Fauci, director of the U.S. National Institute of Allergy and Infectious Diseases, told NBC on Sunday that he “would not be surprised” if Omicron had already made its way to the United States.

The strengthened measures against the Omicron variant in Korea come as the country weathers the worst wave of Covid-19 infections yet.

The ongoing fourth wave of the pandemic in Korea eased from late September to mid-October as strengthened social-distancing measures continued to limit the hours of business operation and the number of people allowed to gather together.

Starting early November, the country relaxed its social-distancing measures as part of its new nationwide “With Corona” strategy after 70 percent of its population was fully vaccinated. Daily cases, which have rarely broken 3,000, spiked to over 4,000 in the past week.

The number of patients in critical condition hit a record 647 on Saturday, and the number of deaths hit a record 56, bringing total deaths to 3,548 for a 0.8 percent death rate, according to the KDCA.

Of those in critical condition, over 80 percent were 60 or older. 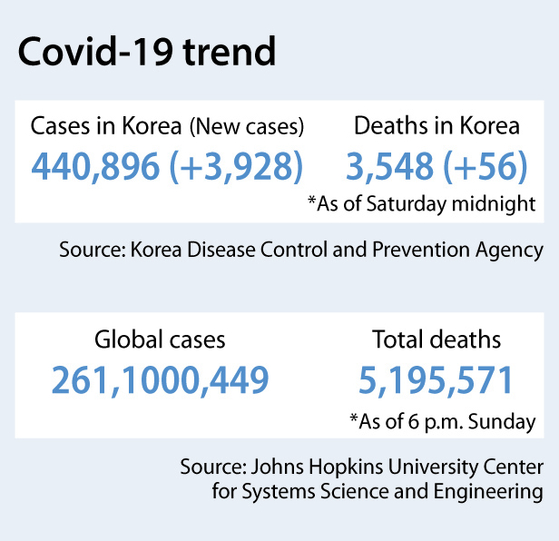 As of Saturday, the total number of patients waiting to be hospitalized was 1,265, according to the Health Ministry, half waiting for a day, and the rest for two or more days.

Due to the lack of hospital beds, some patients with mild cases have been asked to monitor their condition while remaining quarantined at home, with regular over-the-phone check-ups by medical professionals.

As of Saturday, 8,463 patients were being treated at home, of whom 92.9 percent were residents of Seoul, Gyeonggi and Incheon.