When people said AstraZeneca’s Covid-19 vaccine was a kind of “water vaccine,” I didn’t believe it. When the government said all vaccines showed similar immunity, I trusted it. Then, research proved that the AstraZeneca vaccine lost much of its defense against the virus three months after inoculation. I was so confused about the efficacy of the vaccine. Given the lack of precise study on the number of antibodies by age after vaccination, such bafflement could be natural. The government did not know exactly why fully vaccinated people got infected with the virus again, yet it decided to not buy the AstraZeneca vaccine next year. This is not science.

In such circumstances, most governments would be humbled by their unscientific approach. However, in a live-broadcast town hall meeting with citizens on November 21, President Moon Jae-in praised “K-quarantine” for escalating Korea’s image abroad. His self-praise was soon followed by one compliment after another from 300 audience members, including one for his “great leadership.”

The episode affirmed the government’s iconic three-step strategy — of first insisting on the justification of its claim followed by fudging data and wrapping it up with a self-applause. While the number of daily cases is about 100 in Japan, it hovers around 4,000 in Korea. But I have never heard Japan pride itself for “captivating the world” through “J-quarantine.”

The Moon administration’s approach to vaccines is quite similar to its approach to real estate. Though neglecting its obligations for a while, the government has never been stingy with regulations and self-praise. The self-righteous — and “infallible” — government also increased the number of civil servants by more than 100,000 over the past five years. Starting with the largest Presidential Security Service ever, the number of public servants soared spectacularly. 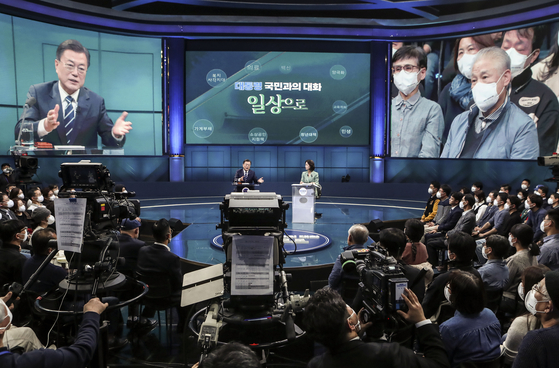 If so, the nation is supposed to run smoothly. But it hasn’t. When China abruptly restricted its exports of urea — a key material for diesel emissions fluid (DEF) for vehicles — a top Energy Ministry official said he thought of urea as a mere ingredient of fertilizers. When a violent man was about to kill three women living downstairs in an apartment building over noise complaints, a female police fled from the crime scene to first call 911 as she was taught to do so at school.

The televised dialogue President Moon had with citizens last week could provide an opportunity to energize a government in disarray and integrate the divided people. But he couldn’t. To do so, Moon should have come up with reasonable numbers anyone can empathize with.

Instead, his remarks were full of self-promotions — for instance, “Our youth employment has been recovered to 99.9 percent of the previous level” or “Only three countries have full vaccination rates higher than Korea.” It may not be wrong data. But that’s obviously an illusion. If you go to Myeong-dong, downtown Seoul, today, you can instantly tell the difference upon seeing a countless number of “For lease” signs everywhere.

But the Moon administration still has a chance. It plans to propose the largest — and arguably the most populist — budget bill next week. The government must revise the bill rather than nonchalantly attribute the gargantuan budget to the Covid-19 crisis. The huge budget bill owes more to mighty populism than to the pandemic. If next year’s budget bill is passed, 1 million mediocre jobs — including the one aimed at watching to see if pet owners dispose of their pets’ by the book — will be created at people’s tax money. Most of these temporary jobs are only for the elderly.

That’s not all. In the current conscription system, a sergeant’s monthly pay goes over 600,000 won ($502). Is that also related to the pandemic?

Whether it be the East or the West — and across all ages — honest policy was proved the best. German philosopher Immanuel Kant saw honesty as a value that must precede anything else. Moon said he would not hand over the real estate crisis to the next administration. Yet, a responsible government would not transfer heavy burden after only bragging about its performance all the while.

In a Q&A book published ahead of the 2017 presidential election, Moon was asked what three important categories he will prioritize if elected president. He mentioned economy followed by security and societal integration. Apart from the second and third subjects, it is the time for him to focus on the economy before its too late.

A tragedy of errors (KOR)