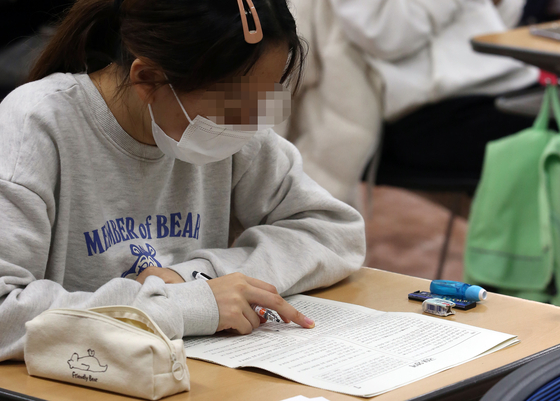 The author is the head of the P Team of the JoongAng Ilbo.


“Wait, what’s this?” a male student exclaimed after he got the test paper. While trying to solve the foreign language section of the Korean CSAT, or College Scholastic Ability Test, foreign students sighed. They had been initially confident, but they were not anymore.

The video of this student is uploaded on a YouTube channel run by a British man, which has 4.43 million subscribers. The senior students at Fulham High School in England were challenged with the CSAT English section. They were given 10 minutes to solve the question, but none could even finish the first question.

What answers did the students choose in the end? They just randomly picked.

The CSAT made even native English speakers randomly choose answers. A week after that test is over, the Ministry of Education presented a new curriculum. The policy to be applied to 1st and 2nd graders from the year 2024 and high and middle school students from 2025 will be finalized and announced in the second half of next year. Middle school students will have a free semester in their first year and a career-related semester in the second semester of their third year. High schools will convert to a credit system.

Classes will also look different. Korean, English and Math will have less emphasis than before. Consequently, college admissions will change from 2028. The government describes it as “future-oriented.” According to the deputy prime minister of education, students will be evaluated and admitted to college through “an educational curriculum pursuing individualized education based on interests.”

But parents are bitter as they learn about the new curriculum. “If Korean, English and Math classes are reduced, should kids go to private academies to learn them?” they complain. Parents already spend so much money on after-school academies and tutoring, and educational gaps will grow further if instruction time at school decreases.

The government says it is changing the educational system for the future, but the reality for kids is wasting energy on taking “tests for tests’ sake.” I don’t want to hear students cynically saying, “We study at private academies anyway. Why should we go to school?”