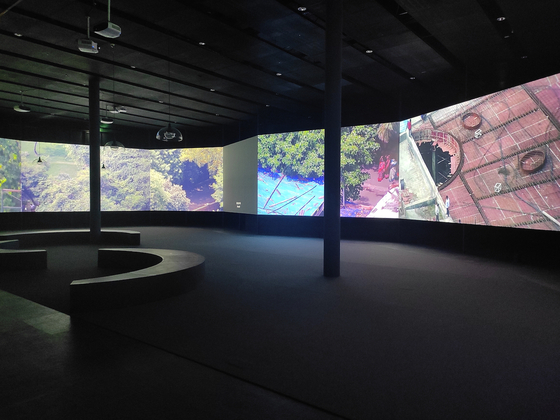 In “Moving Panorama,” a 360-degree dark room has been filled with eight large-format screens to create a virtual tour of cities across the globe including Mumbai, Manchester, Jerusalem and Kabul. [NAM JUNE PAIK ART CENTER]


In the 21st century, even CCTV footage can become video art.

CAMP, a Mumbai-based collaborative studio founded in 2007 by artists Shaina Anand, Ashok Sukumaran and Sanjay Bhangar, asks the question: How can media change its use and purpose?

Such contemplation is explored in “CAMP After Media Promises,” CAMP’s very own solo exhibition after being selected as the winner of the Nam June Paik Art Center Prize 2020. The title is also a backronym, an acronym deliberately formed from a phrase, for CAMP.

In a press event at the Nam June Paik Art Center in Yongin, Gyeonggi, on Thursday, Anand and Sukumaran shared their ideas on “after media,” or what they describe as changing the meaning of media, in particular at a time when media dominates people's lives. 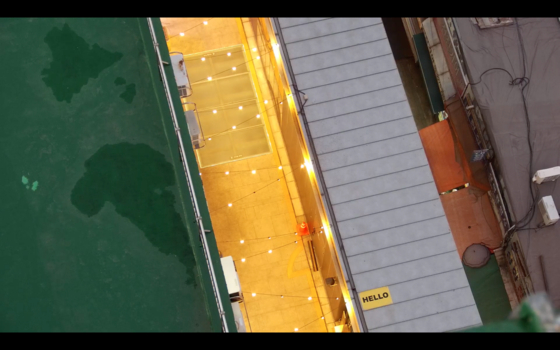 
The exhibition opened its doors on Nov. 25 and consists of three sections: “Moving Panorama,” “A Live Choreographed Camera” and “An Archive Proposal.” The type of technology used in each section is depicted in its name.

In “Moving Panorama,” visitors step into a 360-degree dark room with eight large-format screens that create a virtual tour of cities across the globe including Mumbai, Manchester, Jerusalem and Kabul. Some 20 years of footage have been reconstructed and reedited into 37 minutes.

What makes “Moving Panorama” distinct from the other two sections is that it is the only one to display preexisting works of CAMP. Kim Seong-eun, director of the Nam June Paik Art Center who curated “CAMP After Media Promises,” described the moving canvas-like videos as a new video essay.

The CCTV footage that make up this video essay were inspired from Nam June Paik (1932-2006) himself, who is dubbed the founder of video art and known for pioneering the use of CCTV into his art pieces. “Moving Panorama” was also described by director Kim to be the “archaeology of media,” as some scenes taken long ago are of lower quality than what's seen nowadays. 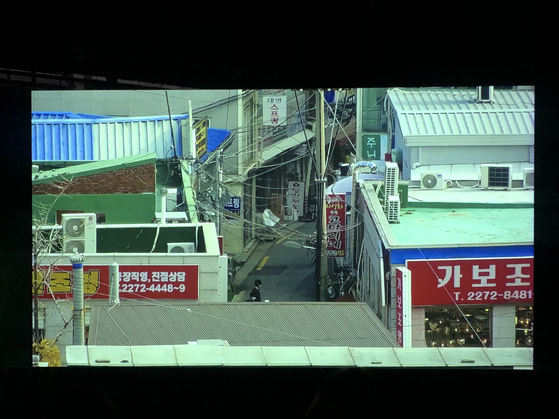 
CAMP attempts to localize its video art in the next section, “A Live Choreographed Camera,” with a live stream of the Euljiro area in central Seoul’s Jung District. A CCTV camera has been installed on the rooftop of Daerim Plaza, where it automatically pans, tilts and zooms to capture the cityscape for an hour before beginning the process again.

This form of live streaming using CCTV aims to look into the meaning of cinema and experiment with the cameras to explore the possibility of using them in completely different ways, such as for movies, says Anand and Sukumaran.

“An Archive Proposal” is an archive for the collection of 175 videos housed in the Nam June Paik Art Center. They have been organized and edited to provide time-based transcripts and annotations.

The proposed archive, titled “Njp.ma,” which is an acronym of “Nam June Paik Media Archive,” organizes the once-dispersed videos into a museum resource, accessible by the public. CAMP drew inspiration from “Pad.ma” (“Public Access Digital Media Archive”), the studio’s open-source footage archive that has been running since 2008. 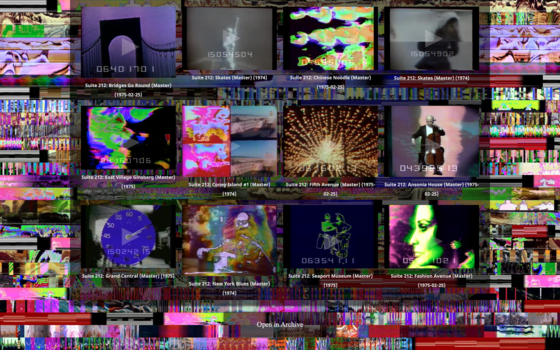 “An Archive Proposal” is an archival proposal for the collection of 175 videos housed in the Nam June Paik Art Center. [NAM JUNE PAIK ART CENTER]


When CAMP was asked about turning CCTV into an art form as opposed to using it for its original purpose of surveilling the public, it suggested looking at the matter in a new light.

“Maybe we have to change our instincts when looking at something,” Sukumaran said. “Not only look as if we are waiting for some crime, but look as we look at cinema right now. For example, yesterday, at 11 p.m., I saw a massive operation to clean garbage from [an] intersection and it was very beautiful.

“I think we have to undo some of our instincts that camera means watching, which means crime will happen and maybe try to see in other ways, the beautiful dogs on the terrace or the plants growing in a garden, and find other kinds of intimacy in the everyday situation.”

“CAMP After Media Promises” runs through Feb. 27. The panorama, CCTV and archive are all available to view online at njpcamp.kr. The Nam June Paik Art Center is open every day, except Mondays, from 10 a.m. to 6 p.m. Admission is free.

No age is too old for a challenge (KOR)

‘Eliminate me from the contest’