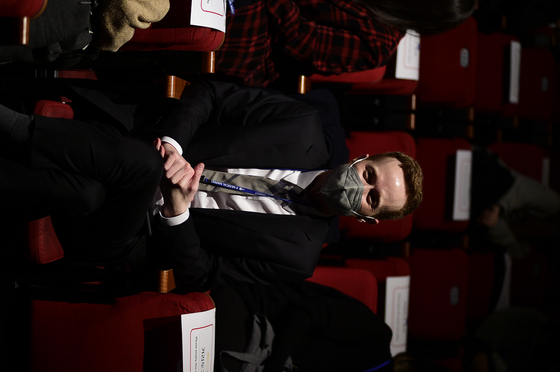 
Cody Lassen, an American theater producer and consultant best known for producing the revival of “Spring Awakening,” which got him a Tony nomination in 2016, says there’s a lot of potential for Korean musicals to “go global.”

“I was taken by how different the music was,” Lassen said after watching one of the showcases of a Korean musical at the K-Musical Market that kicked off at the Seoul Arts Center in southern Seoul on Nov. 24. “It still kind of had a Broadway musical theater sound, but it didn't sound like anything on Broadway. I think [that was] because it was Korean composers who studied music here, and music here is different than music in London or New York, so I was just really impressed. Korean musicals have already proven its potential, and, certainly, it can go global.”

But most of the time, “going global” for Korean musical production teams means going to Broadway or West End.

“I tell this to a lot of people, but Broadway isn’t the finish line for every show,” Lassen said during an interview with the Korea JoongAng Daily. “Because some shows should be off-Broadway because its venues are more unique. Some shows might do better touring the whole country.”

According to Lassen, there are only 41 theaters on Broadway and, of those, about 15 of them stage shows like “Hamilton” or “Wicked,” which are never going to close.

"If Broadway is the only path for the show, it might take you 15 years," said Lassen. "But I think 100 percent, the future of musicals across the world is to develop the musical in one country that can work all over. Ultimately, good musical stories that work universally will work everywhere.”

Lassen visited Korea for the first time to attend the K-Musical Market, which wrapped up its three-day inaugural event on Friday. During the event, he gave presentations regarding his experiences, engaged in panel discussions and had one-on-one business meetings with Korean producers who booked a session to get his advice.

But Lassen says he’s not here just to give advice but also to find new materials he can work on, find potential partners and also learn from other participants.

“Like the multiple-cast system in Korea,” Lassen said. “I like it from two different perspectives. One is the marketing. You can get two different pop stars alternating the roles. But also in America, like everywhere else, creating theater is a lot of work, and, you know, they are very long days, typically 12-hour, six days a week, so we are talking about how that’s hard to have a family and it’s hard to have a life outside of the theater and how can we make that easier for the actors and the technicians. I think that multi-cast system might be a way. If you had the roles doubled, all of a sudden you can take three or four days off every week and actually spend time with your friends and family.”

Lassen recently produced a new musical, “A Commercial Jingle for Regina Comet,” which became the first new musical to premiere in New York since the pandemic. It has an unusually long title compared to other musicals Lassen has produced, such as “Indecent,” “Tootsie,” “Alice by Heart,” “Torch Song” and “The Band’s Visit.”

Usually, Lassen is unique among his colleagues for working with the writers to come up with the titles of the musicals he produces. They are usually very short, and he advises other producers to follow suit.

“Because I think the title is so important in terms of selling tickets,” he said. “Especially nowadays where so many of our ads are digital ads on Google and you only get 200 characters to try to sell your show. So I test titles through a marketing research company. I want to make sure audiences respond to just the title alone. Some of my colleagues will say it’s not that important, but I put a lot of work on picking a title.”

“A Commercial Jingle for Regina Comet,” Lassen says, was “going against my own advice here. But we tested several versions of it, and that was the one that tested the best.”

What kind of musical is Lassen looking for?

“What really annoys me is when someone tries to pitch me their musical and they say they have the next ‘Hamilton.’ Personally, I don’t buy it because that’s one in a million, but also I don’t want the next ‘Hamilton’ because ‘Hamilton’ was such a unique thing and I don’t want to see something that’s trying to copy something else,” Lassen says. “I’m looking for something new and fresh, an exciting thing nobody knows about.”