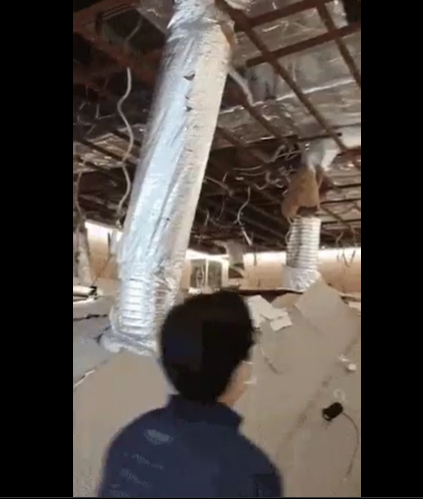 The scene of the ceiling collapse inside a third-floor underwear shop at The Hyundai Seoul department store in Yeouido, western Seoul, on Monday. [TWITTER SCREENSHOT]

Firefighters were called to The Hyundai Seoul department store in Yeouido, western Seoul, at 11:14 a.m. after receiving a report that the ceiling above an underwear shop on the third floor had collapsed.

Three employees were injured on their heads and shoulders after a section of the plaster ceiling gave way, exposing the metal framework above. Two suffered only light injuries, while one employee was taken to the hospital for further treatment.

The accident at The Hyundai Seoul, which is operated by Hyundai Department Store and has been described as Seoul's largest shopping center, comes only nine months after the mall opened its doors in February.

The Hyundai Seoul said that it cordoned off the area where the ceiling collapsed and is carrying out an inspection of the affected section to determine the cause of the accident.

The department store's management also said that it plans to carry out a thorough safety inspection of the whole structure in due course, though it did not specify when.

The ceiling accident raised the specter of one of Korea's greater construction-related disasters: the collapse of the Sampoong Department Store in June 1995, which resulted from structural modifications by the owners that flouted safety regulations and the advice of construction experts.

Unique among Seoul department stores, The Hyundai Seoul's design features a five-story island-like structure inside the building, topped with an urban garden rooftop in the center, that is connected by various bridges to other shopping galleries along the sides.

The department store has 45,527 square meters (490,049 square feet) of retail space and is topped by ceiling skylights, giving an airier atmosphere than most Seoul department stores, which eschew windows and natural lighting.