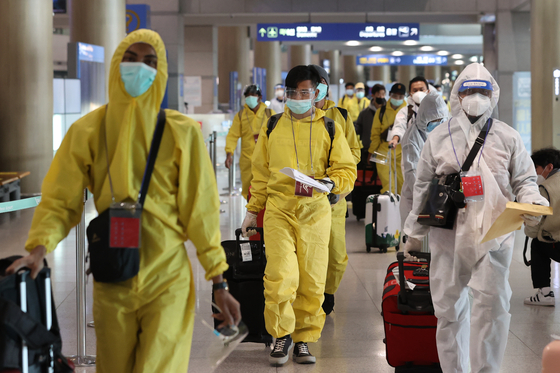 
Korea will add a six-month expiration date to its Covid-19 vaccine passes and speed up the administration of booster shots for people between the ages of 18 and 49.

Despite a ‘very high risk’ level for Covid-19, the government announced Monday, current social distancing measures will remain in place, while most Covid-19 patients will be treated at home.

After a special Covid-19 response meeting presided over by President Moon Jae-in on Monday, the government announced measures to improve the country’s vaccination campaign progress including the boosters.

“It's urgent to finish the third shot vaccination early,” Moon said in the meeting. “A third shot is not an optional shot but a basic shot, and people need to realize that an inoculation will only be complete if they receive a third shot.”

The Korea Disease Control and Prevention Agency (KDCA) announced it will give booster shots to people between the ages of 18 and 49 after five months, instead of the original six months, from their primary series of vaccines.

People in this age group can make reservations for booster shots from Dec. 2, and get inoculated from Dec. 4. Those who want to get a booster shot earlier can try with a so-called leftover vaccine, which will be made available from Dec. 2.

Earlier, booster shots were made available four months after the primary series for people over the age of 59, patients and employees at nursing hospitals and other social welfare facilities, employees of hospitals, and people with underlying diseases. For people in their 50s, soldiers, police and firefighters, the period was shortened to five months, while Janssen recipients and those with reduced immunity are able to get a booster two months after their jab.

The KDCA plans to allow those who need to get booster shots in a rush, such as for overseas business trips, disease treatment or group vaccinations in medical institutions, to get them a month early.

To encourage the administration of booster shots, the government is setting a six-month validity period for the quarantine pass system, a Covid health pass system similar to those used overseas, which requires presenting a vaccination certificate or a negative Covid-19 test result when entering places where the virus could spread more easily.

With the new measure, people will be required to get booster shots every six months. The validity period will go into effect from Dec. 20.

As the occupation rate of hospital beds across the country reached its limit amid a surge in critical patients, all Covid-19 patients will basically be told to stay at home and receive treatment, with a few exceptions.

So far, home treatment has been applied on a limited basis to virus patients aged under 70 who are asymptomatic or display only minor symptoms, but the country will operate home treatment as a base, and hospitalize only those who are deemed to need it or who live in a virus-prone environment.

The government said it will review expanding financial support for home treated-patients. In addition, cohabitants will be allowed to go out for essential reasons, such as for hospital treatment or taking out the garbage.

The new measures come as Korea has seen a rise in cases since it implemented the gradual return to normalcy, or the “With Corona” scheme.

The country’s nationwide risk level for Covid-19 was evaluated as “very high,” the top level of its five-tier system, from Nov. 21 to 27, the KDCA announced Monday.

By region, the greater capital area was at “very high” risk, while other regions were at a “medium” risk level.

The nationwide risk level was raised by one notch from the previous week to the highest, while the level for the greater Seoul area and other regions remained the same.

“We overcame several crises before, but we have faced another crisis that is on a whole other level,” the president said.

“However, we cannot retreat to the past by reversing the gradual return to normalcy that we started,” he added. The government will keep the current distancing rules while putting off further easing of social distancing rules over the next four weeks.

Korea kicked off the first stage of a three-phase “With Corona” scheme from Nov. 1, and each stage is set to go through a four-week implementation period and a two-week evaluation period, making the second stage set to begin around mid-December.

But after assessing the past four weeks of the first phase, the government decided to put on hold  the transition to the next phase, aimed at allowing large-scale events.