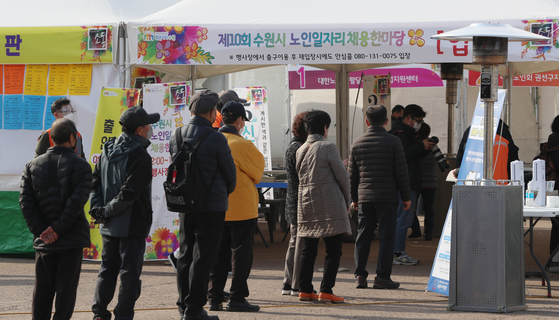 Korean senior citizens wait in line for consultations at a job fair in Suwon, Gyeonggi, on Nov. 29. [NEWS1]

One out of three Koreans over the age of 64 had jobs last year, the highest rate among Organisation for Economic Cooperation and Development (OECD) countries.

Around 34.1 percent of Koreans aged 65 and above were working in 2020, according to a report by the organization, up 1.2 percentage points on year. It was the highest rate among 33 OECD members, and around two times the average, which was around 14.7 percent. 2020 was the first year Korea had the highest percentage, beating Iceland, which had 31 percent.

In a separate survey in 2018, Korea had the highest rate of poverty among the elderly in the OECD, with around 43.4 percent of people 65 or older living below the poverty line. The organization defines poverty as people who live on incomes below 50 percent of the median income.

That poverty rate among the elderly was around three times the average for OECD countries, which was 15.7 percent.

A growing proportion of the elderly in the job market reflects a complex socio-economic problem facing Korea.

The country’s legal retirement age is 60, but many employees at private companies are pressured to leave at around 50 due to scarce executive or high-ranking jobs. When they retire at such a young age, they realize their pensions or severance packages are far below the cost of living and that the social safety net is not sufficient. They are forced to reenter the working world, but often in positions that are temporary or day-to-day, offering very low pay.

Many other developed countries have seeing a decrease in the employment rates for senior citizens.

During the same period, the employment rate for seniors in Korea rose to 34.1 percent from 29 percent.

“The employment rate of senior citizens rose as the government temporarily increased job positions for the elderly after the Covid-19 pandemic,” Yoo Jae-eon, social welfare professor at Gachon University, said. “But the problem is that the jobs offered by the government doesn't really pay them enough.

“Compared to other developed countries, the amount of public pensions Korean seniors receive is too small, so they are forced to work after retirement,” Yoo added. “The government should come up with some measures to help them get jobs in the private sectors."

Banking the old-fashioned way is defended by FSC

With elderly car accidents on the rise, gov't looks to tougher testing