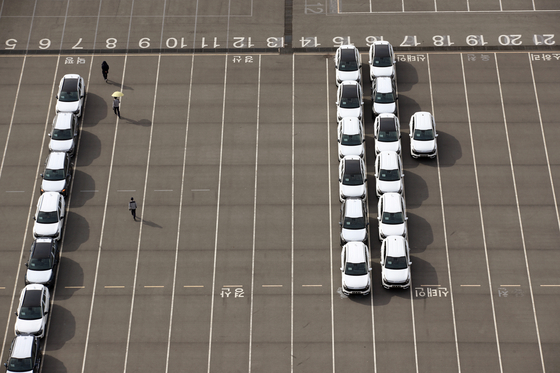 Vehicles from the production line at Kia’s plant in Gwangju on Nov. 2. The shortage of vehicle chips has led to sharp decline in automobile production affecting the country’s overall industrial output. [YONHAP]

Industrial production rose 4.5 percent on year in October after falling 1.8 percent the previous month, according to Statistics Korea, as the economy continued to recover.

The strong month was led by semiconductor output, up 38.7 percent. Vehicle output declined 13.5 percent with the chip shortage slowing production.

The broader measure of industrial output, which includes the mining and manufacturing of industrial production plus services, construction and public administration, was up 4.8 percent in October on year, following a rise of 1.4 percent the previous month.

On month, industrial output fell 1.9 percent. This is the sharpest month-on-month drop since a 2-percent decline in April 2020.

Manufacturing exports were up 3.6 percent on year in October, while domestic manufacturing output fell 0.2 percent.

Services output was up 5.2 percent in October on year as insurance and finance output rose 7.2 percent and wholesale and retail output grew 4.3 percent.

Consumer spending grew 7.4 percent on year, with food and beverage sales up 8 percent. But month-on-month, it increased 0.2 percent.

"Fewer workdays due to the substitute holidays for the National Foundation Day and Hangeul Day in October were factors that led to the decline in output," Hong said in a social media post Tuesday.

He also noted the global supply crisis affecting the production of automobiles and investment.

Hong was confident that the figures for November will improve with robust exports and the improvement in the domestic market as social distancing regulations were eased in early November.

"There are downward risks such as global supply setback and inflation and uncertainties regarding Covid-19, including the ongoing spread of Covid-19 locally and the emergence of a new variant," Hong said.

Rice harvest increases for the first time in six years, up 10.7%