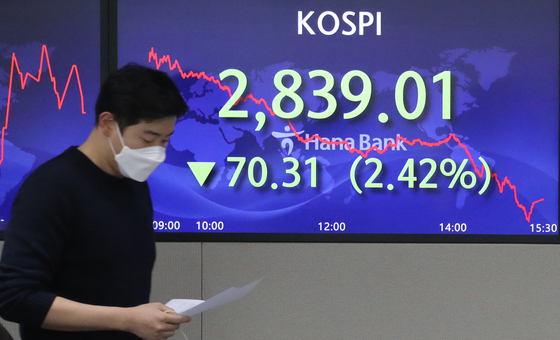 A screen at Hana Bank's trading room in central Seoul shows the Kospi closing at 2,839.01 points on Tuesday, down 70.31 points, or 2.42 percent, from the previous trading day. [YONHAP]


The Kospi closed at its lowest level this year Tuesday as investors freaked out over the Omicron coronavirus variant. The won rose against the dollar.

But the index swung to losses and increasingly lost ground on foreign and institutional sell-offs.

Korea reported 3,032 new Covid-19 cases Tuesday, with the new variant not being detected yet.

The local currency closed at 1,187.9 won against the dollar, down 5.1 won from the previous session's close.