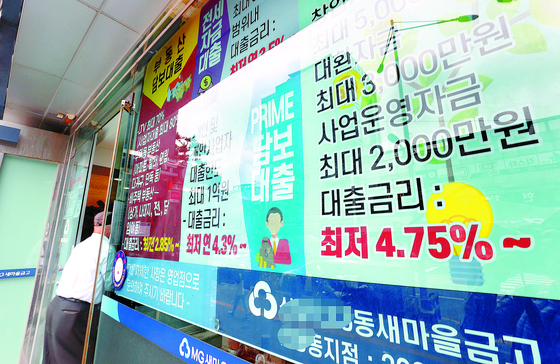 Loan advertisements are displayed on the wall of a Korean Federation of Community Credit Cooperatives bank branch in Seoul. [YONHAP]


Two more banks stopped issuing mortgages after the financial regulator began applying pressure on financial institutions to limit lending, and borrowers with poor credit could suffer the most.

The National Credit Union Federation of Korea (NCUFK) will temporarily stop writing new unsecured loans and mortgages starting Tuesday, with no date for resumption given.

Jeonse loans will still be offered.

The Korean Federation of Community Credit Cooperatives (KFCC) halted mortgages on Monday, with no date given for resumption.

It has suspended its incentive program whereby loan consultants receive a commission for arranging new loans.

Many major commercial banks, including KB Kookmin Bank, Woori Bank and Hana Bank, suspended or restricted the issuing of loans in August after the financial regulators told banks to restrict lending, in an effort to slow the increase in household debt.

Being denied loans at major commercial banks, people have been turning to cooperative banks like the NCUFK and the KFCC. According to the Bank of Korea, cooperative banks had a total of 209.3 trillion won ($175.8 billion) of loans outstanding at the end of the third quarter, up 7.56 percent from the beginning of 2021.

The regulators have put a cap on loan growth for cooperative banks at 4.1 percent.

NCUFK loans were up 4.4 percent.

Kim So-young, an economics professor at Seoul National University, said people with weak credit will be hurt more due to the balloon effect. Banks that do make loans have been lending to individuals with good credit for the sake of credibility, leaving those with weaker credit nowhere to go.

"With the balloon effect starting to take place as financial authorities put a limit on loan amounts, people who are financially vulnerable could be pressured to turn to illegal loans," said Professor Kim.

The government announced October that jeonse loans will not be included when calculating the total amount of household lending, starting from the fourth quarter. The change gives more room for banks to lend without going over the established loan cap.