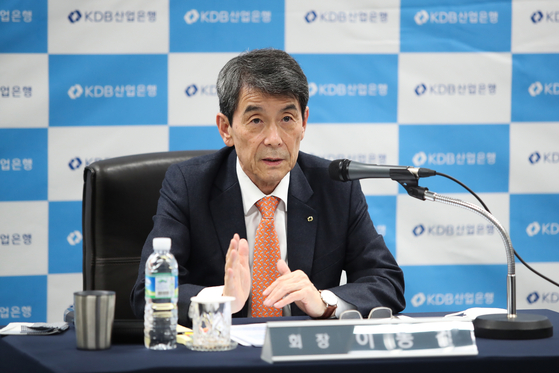 
Korea Development Bank (KDB) Chairman Lee Dong-gull said no financial support for Edison Motors will be available unless the company has a clear and sustainable business plan for SsangYong Motor.

“KDB hasn’t received any loan requests from Edison Motors nor any detailed documents about the company’s plans how it will run SsangYong Motor,” Lee said during an online press briefing held Tuesday. “There are many concerns and doubts regarding Edison’s acquisition of SsangYong. I believe the company is quite confident, but I recommend a third-party institution should thoroughly review the company's plans for SsangYong.”

Lee’s remark came as a local consortium led by Edison Motors continues the process of acquiring the debt-laden carmaker after it was selected as the preferred bidder on Oct. 20. Edison was to conclude due diligence by Nov. 23 and start the acquisition.

But the company has requested the Seoul Bankruptcy Court to extend the period. The deadline has been extended to Nov. 30.

While it is estimated that it would cost 1.5 trillion won ($1.26 billion) to acquire SsangYong Motor, Edison may not be able to raise sufficient finding.

Edison Motors, an electric truck manufacturer based in Hamyang, South Gyeongsang, reported a revenue of 89.8 billion won in 2020. Its operating profit was 2.8 billion won.

Edison Motors said it can raise around 800 billion won by issuing new shares.

“If Edison wants a loan from KDB, it must come up with specific and sustainable plans about SsangYong's future,” Lee said. “I read an article about Edison Motors CEO Kang Young-kwon that he said the acquisition is possible without help from KDB. So if he thinks it’s possible without the bank's help, it should go for it.”

Lee also criticized Kang’s previous remark that he said between 50 billion won to 100 billion won will be enough to develop three to five EV lineups during a press conference in October.

“EV is a market that many global automakers push forward with plans of spending astronomical amount of money. Hyundai Motor said it will spend 100 trillion won by 2025 while Volkswagen vowed 62 trillion won of investment,” Lee added. “I doubt if Edison’s 50-billion-won is a realistic plan.”

“A company only can revive if it earns trust from market,” the chief of the state-run bank continued. "There are four factors that need to be proved, finance, technology, future vision, and management capability. If Edison Motors proves it has all four, the market will respond. But if it's not, it will be not easy for the company to persuade the market."

The European Commission announced Nov. 23 that it is resuming a probe into KSOE’s acquisition of DSME, which has suspended last year due to the pandemic. The probe is planned to be finalized by Jan. 20.

On the ongoing merger process of Korean Air Lines and Asiana Airlines, the head of the state-run bank said the company is currently waiting for an approval from antitrust regulators of various countries, including Korea.

Lee added that it is unpredictable when the regulators would give the approvals, but quick approvals are essential at the time in order to normalize Korea’s airline industry, as well as for engaged workers who are suffering.