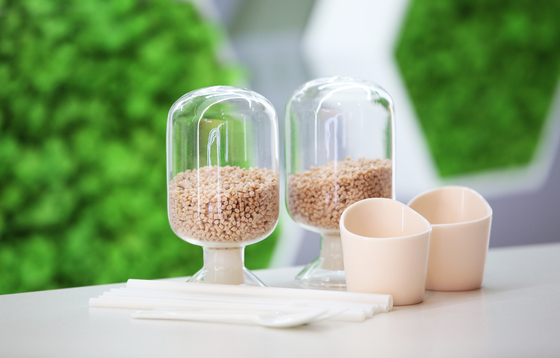 Biodegradable polyester and plastic products made from the eco-friendly material by SKC. [SKC]


Companies are tapping into the biodegradable plastic market as regulations and eco-friendly consumers call for plastic substitutes.

A venture was formed last week between SKC, a chemical company 40.64 percent owned by SK Inc., Daesang and LX International to a build a plant manufacturing polybutylene adipate terephthalate (PBAT), a type of polyester that is biodegradable when composted. The venture is tentatively named Ecovance.

The venture will begin marketing of PBAT in 2023. Its plant will have an annual production capacity of 70,000 tons of PBAT, the world’s second largest PBAT manufacturing plant, according to SKC.

Once completed, the plant will manufacture high-strength PBAT, meaning it has the strength of regular petroleum-based plastics by being made with nanocellulose extracted from wood.

PBAT production technology will be provided by SKC and biomass raw ingredients to make it will be supplied by Daesang. LX International will do sales and overseas marketing.

“We are already in discussion with around 20 corporate customers,” said a spokesperson for SKC.

SKC has been working to cut plastic usage in agriculture as well. The company has been providing high-strength PBAT to Ansan, Gyeonggi-based Ihlshin Chemical and producing biodegradable mulch film — a plastic film covering parts of the soil to prevent moisture loss and weed growth. NongHyup Agribusiness Group says 310,000 tons of mulch film is thrown out in Korea every year. To reduce the waste, a biodegradable version of the film is being supplied to onion farmers in Hamyang County, South Gyeongsang, through June next year.

LG Chem’s 3HP is made by processing glucose and unrefined glycerol through microbial fermentation. It can be broken down by microorganisms into water and carbon dioxide, not leaving any non-degradable waste, like micro-plastics.

“3HP can also be used to manufacture superabsorbent polymers [SAPs] that are used for diapers and other products such as paint, adhesives, coating agents and carbon fibers, and thus the market has high growth potential,” said a spokesperson for LG Chem.

The two companies will work together to produce 3HP prototypes by 2023. LG Chem will provide microbial fermentation technology and GS Caltex will provide its processing facilities.

Starting with the recent partnership, the companies said they plan to work together further in the so-called white bio sector, businesses aiming to replace materials used in chemical manufacturing with renewables.

Korea and other countries are tightening restrictions to cut down on single-use plastic, and the business is seen as highly promising. According to a report by the Korea Investor Relations Service (KIRS), the bioplastic market was valued to be $28.8 billion in 2020 and is expected to grow an average of 15 percent a year to $34.3 billion in 2021 and 40.9 billion the year after.

“Factors such as environmental regulations implemented around the world, consumers changing their perspective to go green and the shortage of petrochemical resources are driving the growth of the bioplastic industry both locally and globally,” said Kim Hye-ran, an analyst at KIRS.

LG Chem teaming up with Unist on technologies