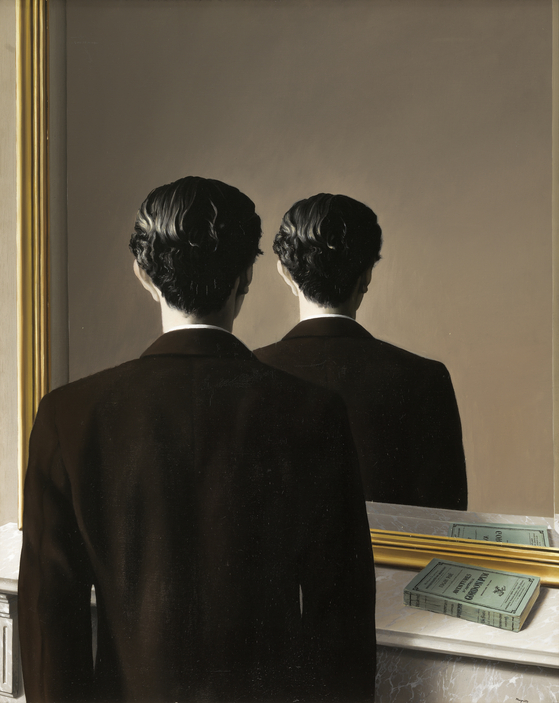 
Surrealist art might have more resonance in these pandemic-hit times, because everyday life has turned unfamiliar, arousing feelings of uneasiness and demanding new ways of thinking.

Surrealism is an art movement which started in the early 20th century that explores the unconscious, dreams and present familiar things in unfamiliar ways so as to challenge norms and conventions.

Two large-scale Surrealist art exhibitions kicked off in Seoul last Saturday. One is “The Surreal Shock” at the Seoul Arts Center (SAC) in southern Seoul, which features famous works such as “Not to Be Reproduced”(1937) by René Magritte (1898-1967) and “The Face of War” by Salvador Dalí (1904-1989) from the vast Surrealist art collection of Museum Boijmans Van Beuningen in Rotterdam, the Netherlands.

The other is a retrospective of the Spanish master Dalí at Dongdaemun Design Plaza (DDP) in central Seoul.

Visitors to the “The Surreal Shock” exhibition at the SAC’s Hangaram Art Museum might be surprised to learn that the famous artworks on show, which have appeared in many art books, are from Museum Boijmans Van Beuningen in Rotterdam, lesser known to Koreans than big museums in New York, London and Paris.

“The museum has the largest Surrealist art collection in Europe,” said Yoo In-taek, president of the Seoul Arts Center. About 180 pieces from the collection are on loan. 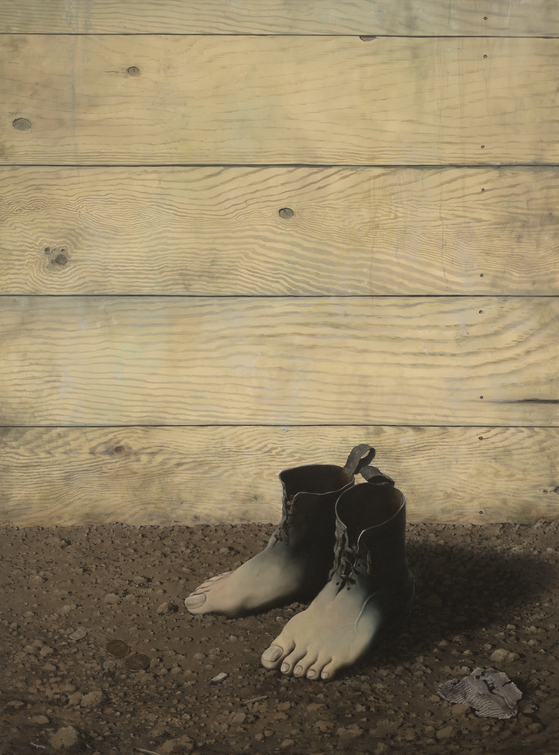 
The well-known works include “The Red Model III”(1937) by Belgian artist Magritte in the exhibition’s first section “Surrealist Revolution.” The painting depicts a pair of shoes whose parts are human feet. The unexpected and strange combination of the two ordinary things challenges the conventional dichotomy — the living body versus the inorganic object, as well as the inside versus the outside. The dislocation of things from their ordinary contexts, such as in this painting, is called dépaysement in Surrealist art.

This section also houses “Couple with Their Heads Full of Clouds” a diptych painting by Dalí, whose panels are cut out like the silhouettes of the characters in the 19th-century French painter Jean-François Millet's “The Angelus,” a famous painting which inspired and became an obsession for Dalí for a long time. The silhouettes are intended to be “the mental portraits of Dalí and his wife and muse Gala Dalí,” according to Els Hoek, curator of the Dutch museum who attended the press preview on Friday. 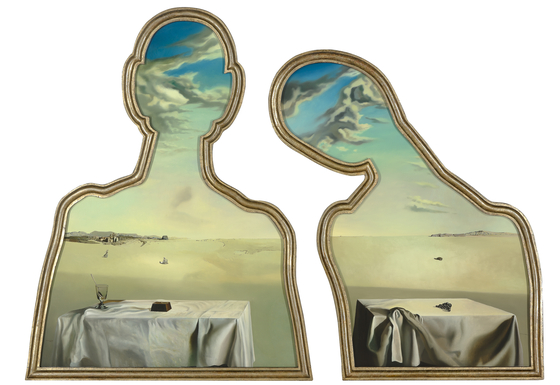 
The section, which is a kind of introduction to Surrealism, also has important books and documents such as “Surrealist Manifesto”(1924) by French poet André Breton (1896-1966), who was the co-founder and leader of the movement. The exhibition is fit for those who are interested in in-depth study of Surrealism, as it deals with the various aspects and meanings of the 20th-century art movement in the context of the broader history of arts and culture.

Next to the introduction section is “Dada and Surrealism,” a section which explores how the emergence of Dada, the avant-garde art movement that questions and challenges every kind of social norm including those in art with often nonsensical artworks, led to the birth of Surrealism. It features works by French Dada artist Marcel Duchamp (1887-1968), considered to be the pioneer of conceptual art, and by American artist Man Ray (1890-1976) who was involved in both Dada and Surrealism. 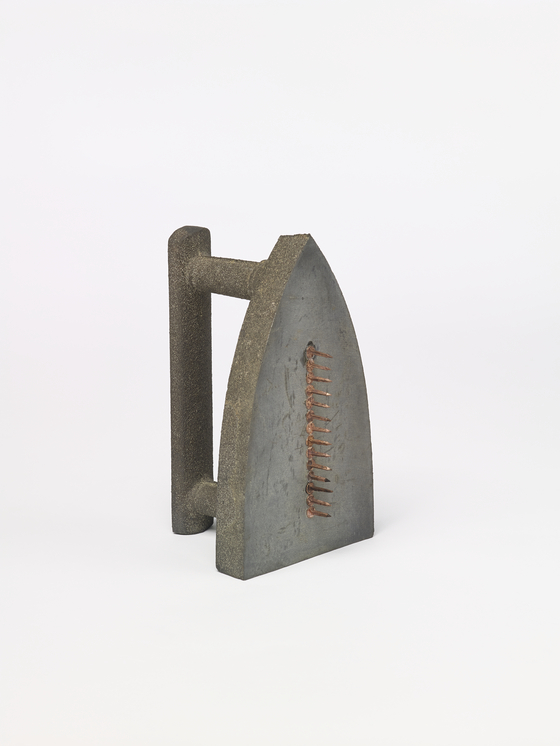 
In particular, there is the 1974 replica of “The Gift” by Ray, an iconic Dada work, the original of which was created in 1921 but subsequently lost. An example of readymade, which refers to artworks made with manufactured objects, “The Gift” consists of an iron with thumb tacks glued to its main plate. The strange combination of ordinary objects evokes a sense of uncanny, which Austrian psychologist Sigmund Freud (1856-1939) used to describe the anxious feeling when something is familiar and yet alien at the same time. Most Surrealists were heavily influenced by Freud.

In the following sections, artworks are arranged under the key concepts of Surrealism such as “Dreaming Mind,” “Chance and the Irrational,” “Desire” and “Strangely Familiar.” The exhibits encompass paintings, drawings, sculptures, photography, films and readymades. “You will see the different styles and materials the artists used. Surrealism is not about a certain style or format,“ Hoek said.

Hoek also asked the audience to pay special attention to works by female Surrealist artists who are undervalued and lesser known compared to their male counterparts. Those featured in this exhibition include Argentinian-British artist Eileen Agar (1899-1991), German-Swiss artist Méret Oppenheim (1913-1985) and British-Mexican artist Leonora Carrington (1917-2011).

The “Dreaming Mind” section includes several paintings by Dalí that are good examples of his double-image technique, which he called “the paranoiac-critical method.” In the painting “Spain,” from a distance viewers will see a woman’s figure but, getting closer, the viewer will discover that the woman’s torso and face are made up of battling warriors. It symbolizes the Spanish Civil War. 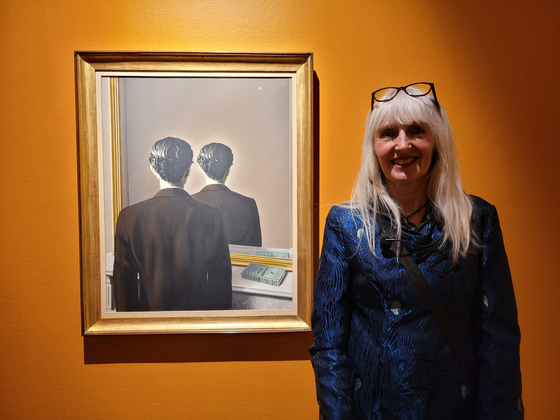 Els Hoek, curator of Museum Boijmans Van Beuningen in Rotterdam, the Netherlands, stands beside Rene Magritte's ″Not to Be Reproduced,″ the highlight of ″The Surreal Shock″ exhibition at the Soul Arts Center's Hangaram Art Museum in southern Seoul. [MOON SO-YOUNG]


Hoek picked “Not to Be Reproduced” by Magritte in the last section “Strangely Familiar” as the exhibition’s highlight. The painting depicts the appearance of a man from behind while the mirror in front of him strangely reflects the back of his head rather than his face, but reflects the mantelpiece and book in front of him as normal.

The mysterious and even creepy image inspired many films such as the Korean horror film “Into the Mirror”(2003) directed by Kim Sung-ho. However, the painting is not only about mystery but also asks a rational question about the art of painting and representation. Although viewers quickly conclude that the man’s image on the right is a mirror reflection, the two images of the man are both Magritte’s paintings, in other words, just paint on canvas. So why do we think the left one is a real man and the right one is his weird mirror image?

Regarding “Into the Mirror,” Hoek said, “Magritte, together with Marcel Duchamp, formed the foundation for conceptual art. He produced contemporary ways of thinking of reality as a construct — reality not as given but as something that we humans make.”

The exhibition runs at Hangaram Art Museum of the Seoul Arts Center in southern Seoul through March 6, 2022. Admission is 20,000 won ($16.80) for adults. For more information, visit http://surrealism2021.modoo.at

Displaying his eccentric and bizarre oil paintings and illustrations from the early 1910s to 1980s, the retrospective of Dalí at the DDP in central Seoul, breaks down the artist into 10 major themes according to chronological order. The exhibits are loaned by Dalí's Theatre-Museum in Figueres, Spain; Museo Nacional Centro de Arte Reina Sofía in the Spanish capital of Madrid; and Salvador Dalí Museum in Florida, United States.

Over 140 pieces from installations and cartoon clips to movie clips and paintings make up the entirety of Dalí‘s versatile artistic scope. He was not simply a painter; he continuously challenged himself in new fields. 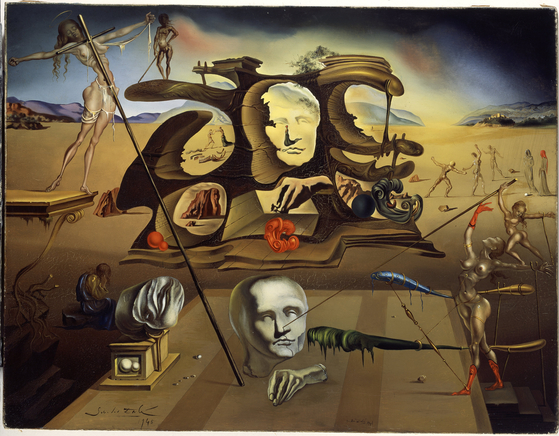 
Dalí collaborated with British film director Alfred Hitchcock (1899-1980) for the art in the thriller film “Spellbound”(1945), which is now on view in the show. He even collaborated with American animator Walt Disney (1901-1966) from 1945. Although the project was suspended, a short animated film was completed in 2003 after both of their deaths. The animation titled “Destino”(2003) is also on view.

Dalí is said to have been deeply influenced by Spanish painter Diego Velázquez (1559-1660) and Italian painter Raphael (1483-1520). His use of dreamlike images, seemingly based on the subconscious, also suggest a Freudian interpretation. Dalí and the Austrian founder of psychoanalysis met in the 1930s.

Dalí was even quoted by the exhibition to have said, “Give me two hours a day of activity and I’ll take the other twenty-two in dreams.”

Such imagery, which seems like an escape from reality, is portrayed in pieces like “Bust of Voltaire” (1941), “Napoleon’s Nose, Transformed into a Pregnant Woman, Strolling His Shadow with Melancholia amongst Original Ruins” (1945) and “Dematerialization Near the Nose of Nero” (1947). 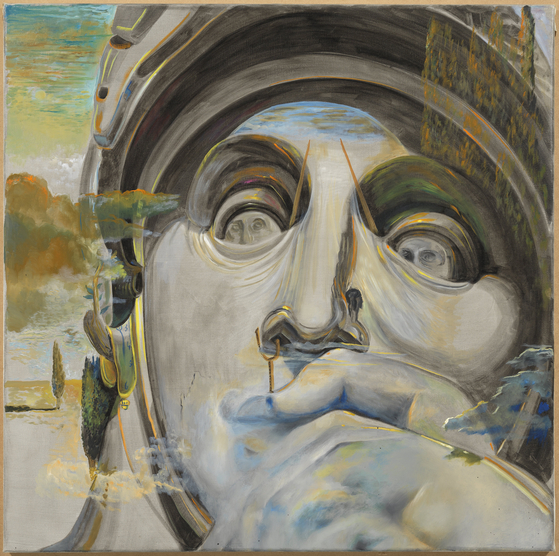 
Though the exhibition failed to get Dalí’s famous works such as “Soft Self-Portrait with Fried Bacon” (1941) which is part of the collection in Dalí's Theatre-Museum in Figueres, visitors will be able to fully explore the lesser-known sides to his work. For instance, Dalí illustrated the children’s book “Alice’s Adventures in Wonderland” by Lewis Carroll in 1969.