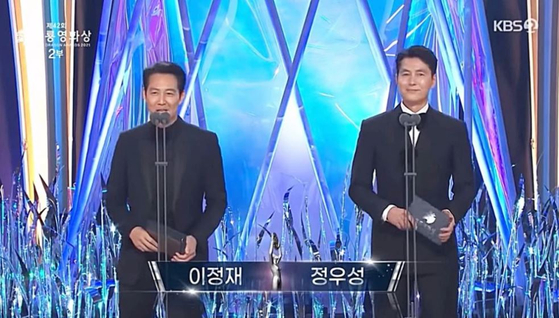 Lee Jung-jae, left, and Jung Woo-sung on the stage of the Blue Dragon Film Awards on Nov. 26 to present an award. [SCREEN CAPTURE]


With actor Jung Woo-sung testing positive for Covid-19, concern is on the rise about the possible spread of the virus to actors who attended the Blue Dragon Film Awards, held Nov. 26.

The attendants did not wear masks most of the time during the event, though they were seated with one empty seat between them. Jung was fully vaccinated, according to Artist Company.

Organizers say that Jung "hardly came into contact with other actors at the ceremony." Those who did come close to the actor were advised to be tested, the organizers added.

Lee Jung-jae, who presented an award with Jung without wearing a mask, was tested after the ceremony before traveling overseas, and the test was negative.