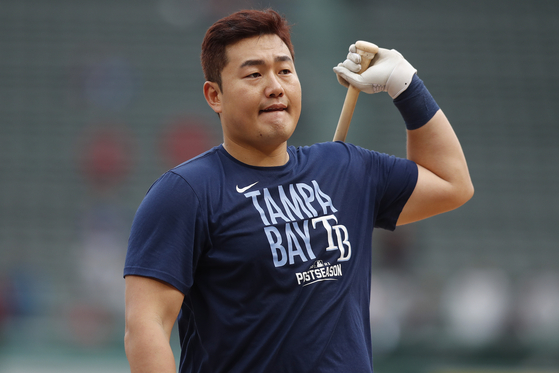 
The Tampa Bay Rays on Tuesday announced a one-year, $3.2-million deal with Choi Ji-man, keeping the Korean slugger in Florida for at least another season.

The deal allows Choi, who batted .229 with 11 home runs and 45 RBIs in 83 games this year, to avoid salary arbitration.

Choi struggled with injuries throughout the 2021 season, with three separate spells on the injured list. Knee problems during spring training forced Choi to undergo surgery, taking him out of the early weeks of the season. Choi joined the club on May 16, but then ended up on the IL again, this time with a groin strain, in June.

In September, Choi was out again with tightness in his left hamstring, and although he returned for the postseason, he struggled at the plate.

The Rays have had two especially good seasons, winning the AL East for two years in a row. Last year, the Rays made it all the way to the World Series, where Choi became the first Korean batter ever to appear in the championship tournament. This year, the Rays were knocked out in the ALDS by the Boston Red Sox.

Choi signed with the Seattle Mariners out of high school in 2009, but it wasn't until 2016 that he made his major league debut with the Los Angeles Angels. Choi moved to the New York Yankees in 2017, then to the Milwaukee Brewers in 2018, before finally arriving in Tampa later that year.

Throughout six seasons in the majors, Choi has a .241 career batting average with 267 hits, 173 RBIs and 50 home runs. Injury problems have been an issue throughout his career, with 2019 the only year when Choi appeared in over 100 games. His .229 batting average in 2021 was the worst since his debut season.

Choi isn't the only player on the Rays squad with a Korea connection — on Monday, the Florida club signed a two-year, $10-million deal with former Lotte Giants star Brooks Raley.

Raley appeared in the KBO fairly early in his career, joining the Giants in 2015 after being drafted by the Chicago Cubs in 2009 and debuting in 2012. He played with the Giants for five years, from 2014 to 2019, before joining the Cincinnati Reds.

Despite joining the Reds on a minor league deal, Raley made the starting roster before being designated for assignment and picked up by the Houston Astros. Last season, he appeared in 58 games, ending the season with two wins, one loss and two saves and 4.78 ERA.

Due to his uncommonly long career in Busan, Raley remains a very popular player with Giants' fans.