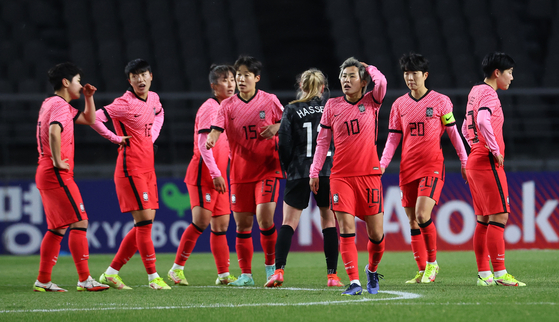 The Korean women's national football team reacts after losing 2-0 to New Zealand in a friendly at Goyang Stadium in Gyeonggi on Tuesday. [YONHAP]


Korea suffered an unexpected 2-0 defeat in a women's friendly against New Zealand on Tuesday at Goyang Stadium in Goyang, Gyeonggi, conceding two goals in the final 10 minutes of the game.

After a strong first half, defense became an obvious issue for the Korean squad as the end of the game neared. Both New Zealand goals were scored by substitutes, Paige Satchell in the 83rd minute and Gabi Rennie in the 85th.

Speaking after the match, women's national team coach Colin Bell was visually upset with how things played out.

"I cannot believe we lost this game," Bell said. "We basically threw the game away. We just gave it to the opponents after playing so well in the first half.

In that game, New Zealand opened the scoring in the 25th minute, with Korea scoring two in the second half.

The final result also didn't play out until the dying minutes of the game in that match, but that time it was Korea that came out on top when Lim Seon-joo netted the go-ahead goal in the 90th minute.

Korea's struggle against New Zealand is a worrying sign. The two New Zealand friendlies served as a warmup for Korea ahead of the 2022 Asian Football Confederation Women's Asian Cup in India next January.

The top five teams at the AFC Asian Cup will qualify for the 2023 FIFA World Cup. At the Asian Cup, Korea has been drawn in Group C alongside Japan, Vietnam and Myanmar. With the top two teams advancing to the knockout stage, the Korean squad will be expecting to advance with wins against the weaker Southeast Asian teams.

New Zealand were expected to provide an interesting — but not unassailable — challenge.

New Zealand, who will host the 2023 World Cup along with Australia, are ranked at No. 23 in the world, just five spots behind Korea at No. 18. The similar rankings certainly set up some tight games, but historically Korea have a significant advantage — in 13 matches now played, Korea have won six and drawn five, losing two.

The New Zealand friendlies mark the second time in as many months that Korea have seen two very different results in a pair of friendlies. The women's team were in action in October for two friendlies against the world No. 1 United States. After surprising the United States by drawing the first game, Korea dropped the second by a massive margin: 6-0.

But moving forward, Korea's problems may be easy to fix. When asked what the team need to do to improve, Bell had a simple fix: Score goals and stick to the plan for the full 90 minutes.