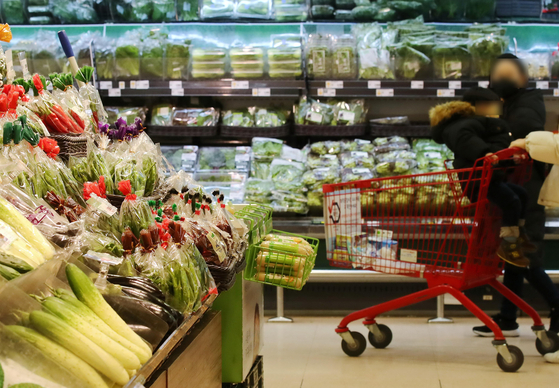 The fresh produce section at a grocery store in Seoul on Thursday. Despite government efforts, consumer price continued to grow more than 3-percent for the second consecutive months. In November consumer price when compared to a year ago was up 3.7 percent, the highest in a decade. [YONHAP]

Consumer prices surged at the highest rate in nearly a decade.

According to Statistics Korea on Thursday, consumer prices in November rose 3.7 percent compared to a year earlier, the second month in a row they rose over 3 percent.

November's increase was the briskest since December 2011's 4.2 percent.

“Prices sharply increased in manufactured goods including petroleum and processed food products as well as in services such as restaurants,” said Eo Woon-sun, a Statistics Korea official. “Agriculture, livestock and fishery prices, which were stable, sharply increased, especially vegetables.”

Higher fuel costs affected the prices of manufactured goods, which went up 5.5 percent. This was the sharpest year-on-year hike since November 2011's 6.4 percent.

Manufactured food prices were up 3.5 percent. The price of bread rose 6.1 percent.

Food manufacturers have been hiking prices to reflect the price of raw materials.

On Tuesday, Dongwon F&B announced it was raising the price of its tuna products an average 6.4 percent. Dongwon F&B controls 80 percent of Korea's market for canned tuna.

Competitor Ottogi hiked the price of its flagship Jin Ramen 12.6 percent, its first in 13 years.

Cucumber prices were up 99 percent while the price of lettuce was 72 percent higher.

Meat prices were 15 percent more expensive than a year ago. Egg prices were up 32.7 percent while imported beef was up 24.6 percent and imported pork 14 percent.

Service were up 3 percent, the sharpest increase since January 2012's 3.1 percent.

The cost of eating at restaurants was up 3.9 percent.

“In December, the international crude price will stabilize and [government] fuel tax cuts will have an effect, slowing the growth [of consumer prices],” Hong said during a government meeting Thursday.

He also emphasized that Korea’s consumer price growth was lower than in other countries.

“The accumulated growth of consumer prices as of October was 2.2 percent, and annually it will be at a level similar to the BOK and OECD projections [of 2.3 percent and 2.4 percent],” Hong said.

Although prices are rising faster in the U.S. -- 6.2 percent in October -- the increase may have a negative effect on consumer spending.

U.S. Federal Reserve Chairman Jerome Powell on Tuesday warned that the current inflation will continue “well into next year.”

“The recent rise in Covid-19 cases and the emergence of the Omicron variant pose downside risks to employment and economic activities and increased uncertainty for inflation,” Powell said. “Greater concerns about the virus could reduce people’s willingness to work in person, which would slow progress in the labor market and intensify supply-chain disruption.”

The Organization for Economic Cooperation and Development raised its projection for Korea’s consumer price growth for this year from 2.2 percent in September to 2.4 percent.

The September projection was a hike from its forecast of 1.8 percent in May.

Its global projection was raised from 3.7 percent to 3.8 percent.

The OECD also raised its outlook for consumer price growth for Korea for next year from 1.8 percent to 2.1 percent.