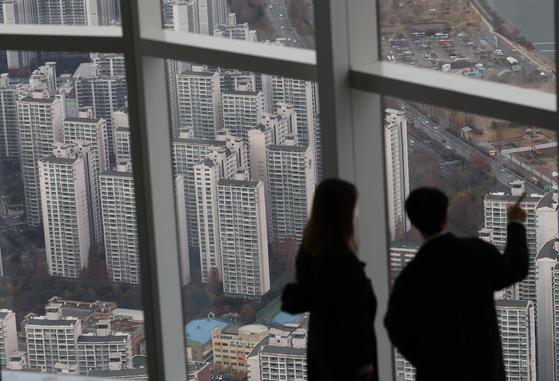 
The property price gap is now the widest in 13 years, raising doubts about the Moon Jae-in government's real estate policies, which were intended to slow the surge in prices.

The top quintile of properties in terms of price are 9.3 times more expensive than the bottom quintile, according to KB Kookmin Bank.

In November, the average property price in the upper group was 1.17 billion won ($994,000), up 5.5 percent compared to the previous month. During the same period, the average price of the bottom group fell 2 percent to 125.8 million won.

The trend held in terms of jeonse prices. The jeonse system, which is unique to Korea, allows tenants to pay a large lump sum to live in a property for a number of years.

The Moon administration's real estate measures may have contributed to the widening gap. As the prices of expensive properties are skyrocketing in the overheated real estate market, more people rush to purchase them to profit.

In May 2017, when Moon took the office, the average price in the least expensive quintile was 118.6 million won. It only increased 6 percent to 125.8 million won in November this year.

But during the same period, the average price of Korea's most expensive quintile jumped 108 percent to 1.17 billion won.

"What the government should do at the time is not just tightening the real estate measures for pricy properties but come up with some measures that can improve all people's quality of life equally," said Seo Jin-hyung, head of the Korea Real Estate Society.