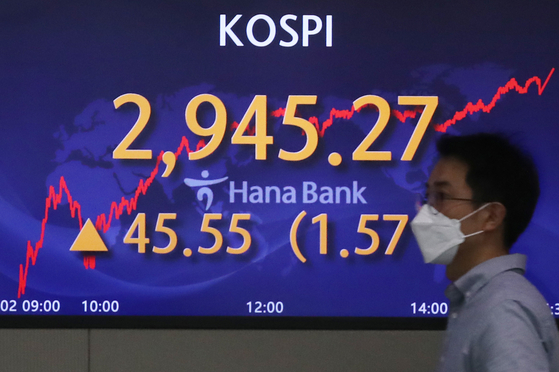 
Stocks rallied for a second straight session Thursday on strong foreign buying. The won rose against the dollar.

Trading volume was moderate at about 523 million shares worth some 11.8 trillion won ($10 billion), with gainers outnumbering losers 756 to 139.

Volatility was high in the early morning, tracking overnight losses on Wall Street that stemmed from worries about global outbreaks of the Omicron variant of the coronavirus.

The Dow Jones Industrial Average retreated 1.34 percent, and the tech-heavy Nasdaq composite declined 1.83 percent, as the first case of the omicron variant in the United States worsened investor sentiment in the global financial markets.

The local currency closed at 1,175.9 won against the dollar, down 3.3 won from the previous session's close.

Stocks eke out a gain as institutions provide support