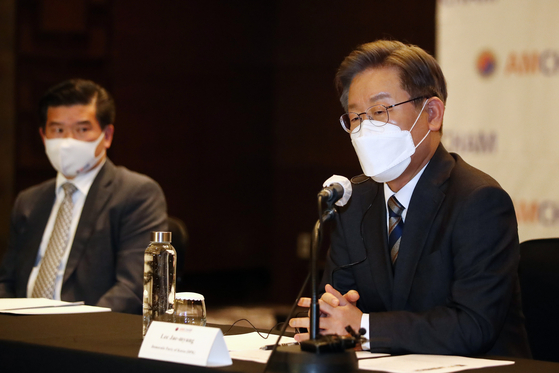 “It is crucial that the law does not hinder competition among companies,” Lee said during a meeting with the American Chamber of Commerce in Korea (Amcham) held in Yeouido, western Seoul, Thursday.

Lee’s pledge was in line with a statement he made earlier this month during a meeting with CEOs of local start-ups, where he vowed to change Korean laws from “positive” regulation to “negative.”

Korea is considered to have “positive” regulation, which means that the law specifically lists things that companies can do, while prohibiting the rest. This is considered a fundamental hurdle for start-ups, especially those that try to expand the frontiers of business and do things that are new.

“Investment and job opportunities from foreign companies is crucial not only to Korean companies but to the Korean government also,” Lee said Thursday. “The relationship between Korean and U.S. companies are quite special historically […] We will make sure to find ways to make that happen smoothly, fortifying the Korea-U.S. relations and alliance.” 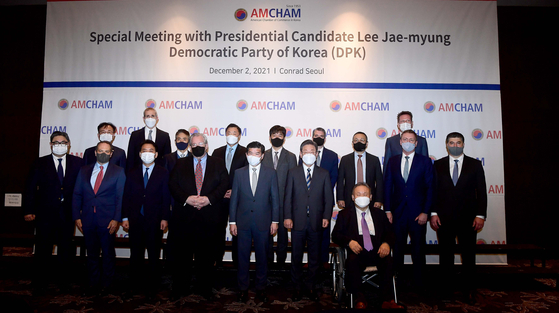 Democratic Party presidential candidate Lee Jae-myung poses for photo with executives of U.S. companies during a meeting held by the American Chamber of Commerce in Korea (Amcham) in Yeouido, western Seoul, Thursday. [NEWS1]


He added that if Amcham member companies provided him with a list of regulations they think are hampering investment in Korea, he will review them and consider changes.

“The technical alliance between Korea and the U.S. is crucial, and we will endeavor to strengthen those ties,” Lee said.

James Kim, chairman and CEO of Amcham, emphasized that the upcoming presidential election will be critical for shaping ties between Korean and U.S. companies.

The number of Amcham’s board members who have been appointed head of their companies’ operations in Asia is the largest in Amcham’s history, meaning that Korea is becoming a key player in the Asian market, according to Kim.

“There is lot of competition with other countries to attract foreign investment from strategic sectors like semiconductors. We need the Korean government’s proactive support to win these R&D investments into Korea. Now is a perfect time to put our best effort forward.”