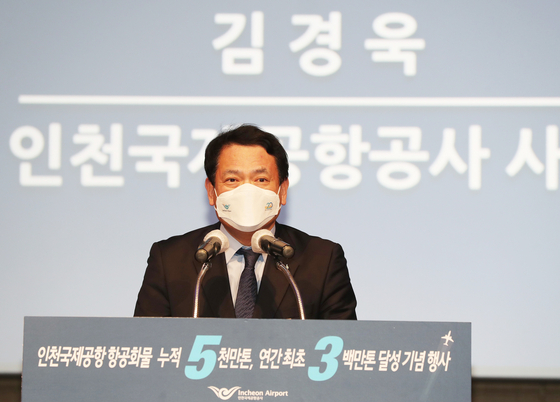 
Cargo transportation at the Incheon International Airport hit a record high this year, while the number of passengers is down more than 90 percent from before the pandemic.

Total cargo passing through the airport broke 3 million tons as of late November for the first in its history. It is the second airport to do so after Hong Kong International Airport. The airport corporation’s accumulated volume of cargo transportation reached 50 million tons.

Total cargo transportation from January through November in 2019 totaled 2.52 million tons, 19 percent lower than the same period this year.

But the number of arriving and departing passengers in 2021 was down by more than 90 percent from 2019.

“The number of international passengers in 2021 is projected to stay around 3.05 million this year, down 95.3 percent from before Covid-19 in 2019 due to the flight restrictions and weak travel sentiment,” said Kim Kyung-wook, president and CEO of the airport corporation, at a press event held in Incheon on Thursday. “The number of international passengers is projected to recover to the pre-pandemic level in around 2025.”

Kim added that an operating loss until next year will be inevitable for the airport corporation, but he expects the airport to swing back to profit in 2023 as 130,000 average daily passengers are expected starting in 2023.

The airport corporation expects 490.5 billion won ($440 million) of revenue this year, down 55 percent on year. The net loss is expected to expand 78 percent this year to 761.4 billion won. The expected debt ratio is 68.4 percent, up 21.9 percentage points from last year.

The airport corporation cited reduced facilities and rent fees. The debt ratio will inevitably increase next year due to the continued operating loss and the expansion of Incheon International Airport Terminal 2, Kim said.

The airport corporation projects its next year revenue at 1.11 trillion won, up more than 120 percent from this year, and expects around 505.1 billion won in net loss from the 761.4-billion-won net loss this year.

“Whether the impact of the Omicron Covid-19 variant will last mid-to-long term should be seen. But we plan to make conservative forecasts,” Kim added.

Around 22 million to 35 million passengers are projected to use Incheon International Airport next year, which is 50.7 percent to 68.7 percent fewer than the total in 2019.