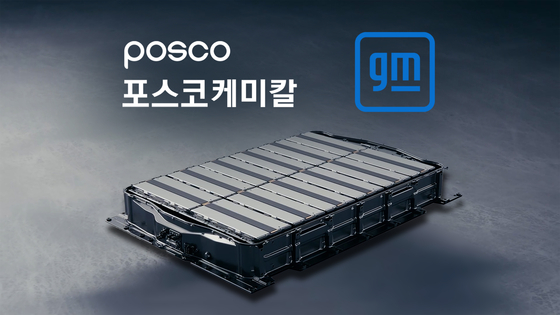 The joint venture will open a factory in the U.S. in 2024 that will manufacture high-nickel cathode materials for Ultium Cells’ soon-to-be-built battery factories in Lordstown, Ohio and Spring Hills, Tennessee.

The location of the joint venture's factory and size of the investment weren't disclosed in Thursday's announcement by the two companies.

This is the first time a Korean battery material manufacturer formed a joint venture with a carmaker amid the global auto industry's race to make cheaper EVs by getting involved in the supply chain for batteries.

Cathode materials represent some 40 percent of a battery's cost, and have expensive materials like nickel and cobalt. They also play a key role in deciding the performance of the battery, such as its energy density.

Posco Chemical’s relationship with Ultium Cells started last year when it was selected as the joint venture’s cathode materials supplier. The Korean company has invested 600 billion won in its Gwangyang cathode materials factory to ramp up output from 40,000 tons to 60,000 tons per year.

Early this year, Posco Chemical was again selected as Ultium Cells' supplier of anode materials, another key component of an EV battery.

With the latest partnership with Ultium Cells, Posco Chemical will continue to expand its overseas business.

"On the back of the latest joint venture investment, Posco Chemical will continue to increase cathode materials production capacity in North America, Europe and China," the company said. "The partnership with a global carmaker lowers the risk of making hefty investment overseas."

In August, the company announced an investment of 281 billion won to build a cathode materials plant in China with an annual manufacturing capacity of 30,000 tons with local partner Huayou Cobalt.

“Our work with Posco Chemical is a key part of our strategy to rapidly scale U.S. EV production and drive innovation in battery performance, quality and cost,” said Doug Parks, General Motors' executive vice president, in a release.

"We are building a sustainable and resilient North America-focused supply chain for EVs covering the entire ecosystem from raw materials to battery cell manufacturing and recycling.”