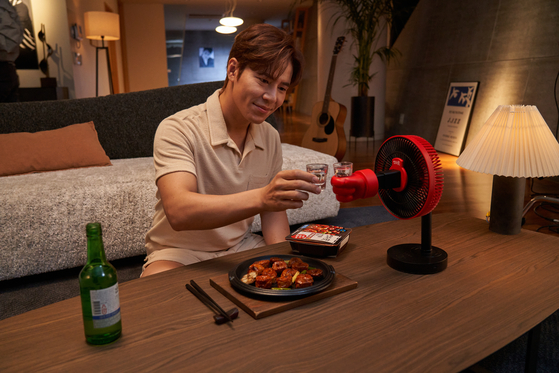 
Daesang, one of the leading food companies in Korea, won two prizes for its Ahnjuya ad campaign at the Korea Advertising Awards this year, the company announced Thursday.

Ahnjuya, a leading anju, or food eaten while drinking, brand, won awards for both promotion and communication design.

Dubbed the “Honsul Fan,” the ad campaign brought a breath of fresh air to the advertisement world, Daesang explained. Honsul is a Korean word that refers to drinking alcohol alone.

According to Daesang, the Honsul Fan campaign was intended to provide customers with a safe and enjoyable environment to drink alone during the summer, when coronavirus cases started to rise.

The Anjuyu ad campaign was highly regarded for offering consumers not only quality products, but also a safe and fun way to enjoy drinking in the contactless era.

“We will continue to come up with ad campaigns that can catch the eyes of consumers,” said an official at The.Watermelon Consulting & Communication, the advertisement company that designed the campaign.

Daesang added that it will keep actively communicating with consumers as the leading brand in the domestic anju market.