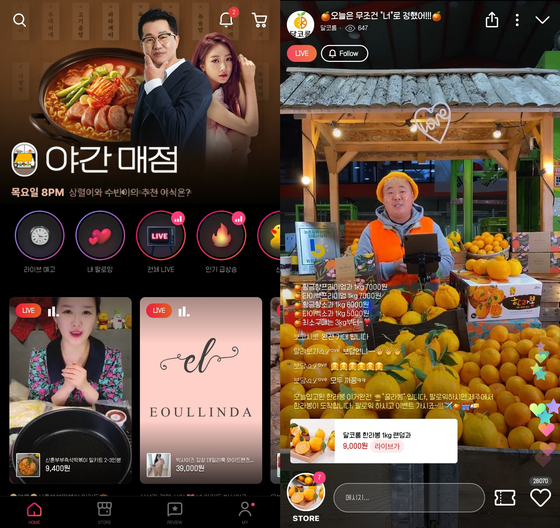 
Kakao acquired half of Grip Company, a local startup specializing in live commerce streaming, for 180 billion won ($153 million), in a major bet on the format becoming a force in digital shopping.

With the purchase of the 50 percent stake, Jeju-headquartered tech company said it would integrate the company into its e-commerce business.

The operator of Kakao Talk will let partnered shops use the live streaming function developed by Grip.

"Kakao will create an ecosystem where anyone can use live commerce, helping smaller merchants broaden their client base at home and abroad," the company said in a statement, adding that it will combine the live-streaming feature with its existing offerings on the messenger.

Formed in 2019, Grip operates an app that allows 17,000 partnered shops to engage in live commerce. Aggregate transactions made on the Grip app totaled 100 billion won as of the end of November.

The partnered stores include Shinsegae Duty Free, AK Department Store and GS25. More than 200 live commerce shows are aired on Grip every day.

It also offers cloud-based live commerce tools to enterprises, enabling the corporate clients to deploy the feature on their own apps or websites.

Among those clients are Qoo10 Japan, an online shopping mall headquartered in Singapore. The start-up plans to make a foray into the United States in the second half of next year.

The purchase came against the backdrop of the rapid growth of the live commerce market as the function allows viewers to interact with the hosts in real time.

Kyobo Securities projects that Korea's live-commerce market will grow to 10 trillion won by 2023 from 2.8 trillion won this year.

Naver introduced its live-commerce service last year, making it available to merchants selling on its shopping platform. Aggregate transactions made through the new service came at 250 billion won as of July this year with total views of 350 million.