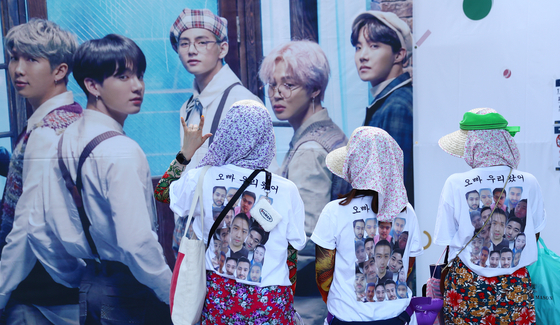 
Regardless of your age, if you're a handsome actor or singer, you too can be an "oppa," or "older brother."

At least, that's what the Oxford English Dictionary (OED) says as of September, after adding 26 words of Korean origin to its records.

Considering the fact that the OED has only listed 23 words of Korean origin since its first edition in 1884, this marks a huge leap for the Korean language.

In the September 2021 update, the majority of the new additions stem from or are related to K-pop, K-drama and K-food.

The list consists of delicacies like "bulgogi" and "chimaek," culture-related words like "hallyu" and "K-drama." And when it comes to Korean music, K-pop isn’t the only genre popular these days — the addition of "trot" seems to have been heavily influenced by cable channel TV Chosun’s hit competition shows, “Miss Trot” (2019-21) and “Mr. Trot” (2020).

“The current influx of Korean-origin words into English is due largely to a phenomenon called hallyu or the Korean wave,” the OED stated on its website, “[which is] the increase in international interest in South Korea and its popular culture, especially as represented by the global success of South Korean music, film, television, fashion, and food.” 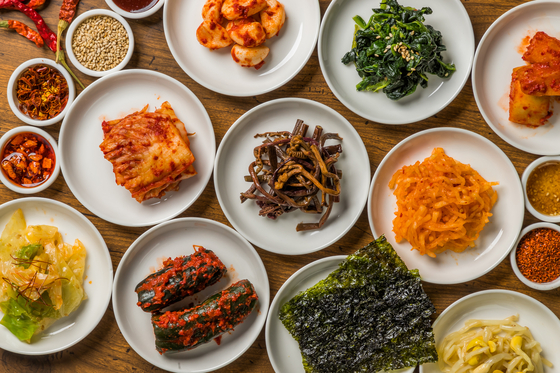 The word "banchan," a small side dish served along with rice as part of a typical Korean meal, was added to the Oxford English Dictionary (OED) in September. [SHUTTERSTOCK]


This update may be something to applaud, but a number of words have undergone discernible semantic changes — some which are quite peculiar.

These same definitions are used in the OED’s first entry of oppa, but a second entry extends the word's meaning to “An attractive South Korean man, [especially] a famous or popular actor or singer.” This explanation is not included in the Standard Korean Language Dictionary.

International female fans have long been calling their favorite Korean male celebrities oppa, as seen online in YouTube videos and on Twitter. One YouTube video, titled “Who’s the Ultimate Oppa?” by Filipino YouTuber Kring Kim, goes through a list of Korean celebrities that includes Park Bo-gum and So Ji-sub. The video has been viewed over 35,000 times and has some 2,400 likes.

The use of the word oppa in this context is widely known among international fans, and even Korean women have been endearingly calling their favorite male celebrities oppa, regardless of age.

A phrase quite often used among female fans in Korea is “You’re an oppa if you’re handsome.” BTS’s Jungkook, who is the youngest in the boy band, is nicknamed the “noona radar” for being able to catch older female fans calling him “Jungkook oppa” during fan meets. Noona is a term used by men to refer to their older sister or an older female friend. During one fan meet in 2016, Jungkook grabbed the microphone and jokingly called out a fan, saying “I’m not your oppa,” because of her obvious age. “From now on, ARMY [BTS’s fandom] will need to bring their ID cards. I’ll be checking them to verify your age,” Jungkook said, making the audience laugh. 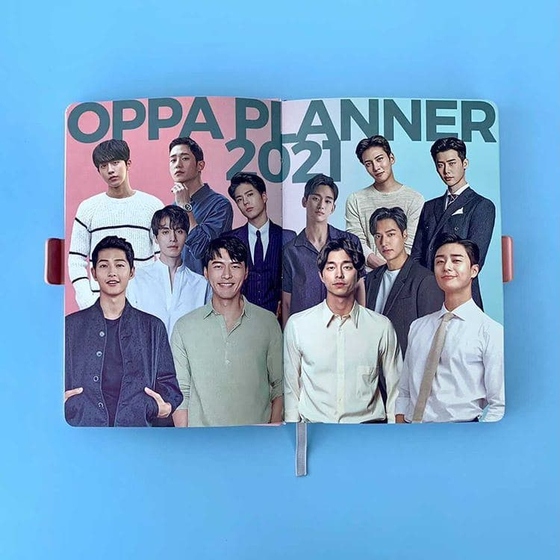 
The same goes for "unni," another word added to the OED’s September update. Unni is a term that a younger female calls her elder sister or older female friend, but again, the OED expanded its use to also include a term that is used to address an admired actress or singer.

Jieun Kiaer, associate professor at the University of Oxford of Oriental Studies, told local newsweekly Sisa IN that the Korean version of oppa and English version of oppa have two very different meanings. Even if Korean female fans have started to use the extended meaning as well, its core remains a reference to an “older brother.”

While the age culture in Korea is difficult to ignore, the same can't be said for most English-speaking countries, so the terms oppa and unni don’t function the same way.

Professor Kiaer calls these “translingual words,” a term used in linguistics that means being relevant in more than one language.

The OED’s definitions for the new Korean words are much more fluid in context compared to their meanings in Korean.

While these two words are only used as nouns in Korean, the OED defines them as adjectives as well. Originally used to refer to something that is lucrative or desirable, for example Koreans often pray for daebak in the New Year, the word can now be used in the following sentence: “This show is daebak!”

Some of the most interesting additions are slang terms like "mukbang" and "skinship," which have left some wondering what really constitutes as Korean language.

"Mukbang," a livestreamed video featuring a person eating, usually large quantities of food, while communicating with their audience, is considered a neologism in Korea, yet was added to the OED. [SCREEN CAPTURE]


Mukbang, a compound word of the stem “muk” (to eat) and “bang” of bangsong (broadcasting), means a livestreamed video featuring a person eating, usually large quantities of food, while simultaneously communicating with the audience. The word is considered a neologism, or a newly-coined word or expression, as it emerged in the 21st century after such videos started trending online. However, the word is not registered in the Standard Korean Language Dictionary.

Skinship is a bit more complicated. It refers to physical affection and contact between people and its etymology is a blend of the English words “skin” and “kinship.” The word itself doesn’t even derive from the Korean language, but the OED still defined it as a word of Korean origin because of how frequently it is used locally.

It is inevitable that such words, whether they be regularly used in K-culture or newly-coined slang, join the OED, Shin Ji-young, professor at Korea University of Korean Language and Literature told the Korea JoongAng Daily. Professor Shin is a linguist who worked as a consultant with the OED editors in relation to the newly-added Korean-origin words.

“Language goes hand in hand with culture. K-culture is the key reason [for this update],” Shin said. “People have become aware of K-culture thanks to ‘listening’ to it. Usually, foreigners watched K-dramas or K-movies that were dubbed in English, but nowadays everyone just watches them with subtitles. They get a chance to directly hear words like oppa.

“In the past, words like 'japchae' would be translated as ‘Korean-style noodles,’ but people have come to realize that it’s better to use the original word as it is than to replace it with alternatives. Alternative phrases just don’t work as well, because Korean culture is a worldwide phenomenon and people want to learn the culture as it is.” 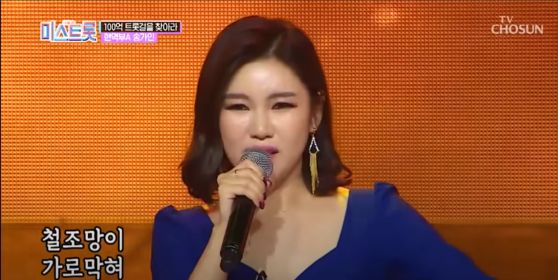 The addition of the word "trot" to the OED seems to have been heavily influenced by cable television TV Chosun’s hit competition shows, “Miss Trot” (2019-21) and “Mr. Trot” (2020). The above is a scene from ″Miss Trot.″ [SCREEN CAPTURE]


The OED goes through an elaborate and thorough process when adding new words.

According to its website, for a word to be considered for inclusion in the OED, it must first be added to the dictionary’s "watch list" database.


The foremost condition that must be met is whether a word has been used as an example in "newspaper archives, online forums, academic studies, magazines, law tracts, recipe books or on social media for published evidence of the word."

Another prerequisite is how long the word has been used for — most of the words in the September update were verified to have been used for at least 13 years, said Shin.

Finally, words have to be deemed usable in a certain intended context, and must capture the OED editors’ attention and interest.

Korea has become a brand in itself, boasting terms like K-pop, K-culture, K-drama and even K-quarantine, the latter coined by the Korean government in 2020. Shin said that this “K-branding” helps enhance efficient communication, since so many people are now aware of what the “K” in these terms stands for.

Foreigners try out the dalgona challenge on YouTube, since the success of Netflix's ″Squid Game.″ [SCREEN CAPTURE]


It is ironic how neologism, like the aforementioned daebak and skinship, are yet to be approved as “proper Korean” but still made it into the OED. Local experts and parts of society have long been worried about how these words, originating from the internet and slang, are destroying the integrity of the Korean language.

Shin believes that this is a matter that should be reflected on from a deeper aspect — is jargon considered “vulgar” because of the meaning itself, or because it is simply new and was made by the general public?

Nonetheless, with the Korean wave continuing to sweep the globe, and Netflix’s biggest show “Squid Game” having set jaw-droppingly impressive records, Korean words like ojingeo (squid) and dalgona (melted sugar candy) may be next to be included in the OED.

“People know ojingeo now, but will it continue to be used? Dalgona might, but what about ojingeo? Who knows?” Shin said. “One thing for sure is that they’re being used right now.”