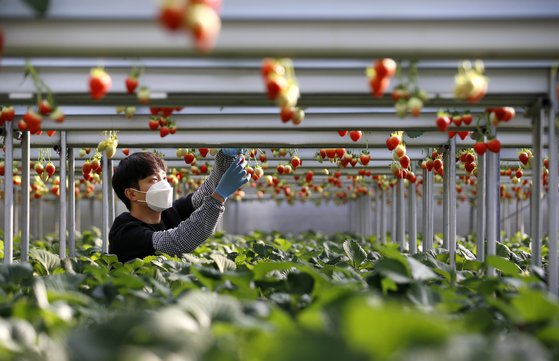 A farmer checks whether strawberries are ready to be picked at his farm. [NEWS1]


While BTS blares over speakers in supermarkets in Paris and students stream "Squid Game" in New York, the government is hoping Korean produce will be the next export that finds its way into the daily lives of people around the globe.

In a bid to achieve this goal, the Korean government has been chartering airplanes for the sole purpose of exporting strawberries to countries like Singapore and Hong Kong, during the fruit's prime from December to April. Efforts are also being made to help local farmers cultivate bigger and sweeter strawberries so that consumers will deem the fruits luxury produce and see them as worthy of a higher price tag.


Thanks to the surge in popularity of fermented foods about five years ago, as well as the release of Netflix’s hit food series “Chef’s Table” in 2017 that introduced Korean temple food using a variety of vegetables, curiosity about local produce has been growing. In 2018, chef Vicky Cheng of fine dining restaurant Vea in Hong Kong even included strawberries from South Chungcheong’s Nonsan in a selection of the fruit it offered from many different countries.

Recognizing the possible demand for premium ingredients, the Korean government made its first move in conjunction with the state-run Korea Agro-Fisheries and Food Trade Corporation in 2018, setting up teams to monitor the quality of produce for export as well as creating new retail channels with premium markets and restaurants.

Such move, as well as the push to cultivate higher-quality produce fit for export, was aimed at securing more shares of the fruit market which was overflowing with produce from countries like China and Japan.

“With the quality of Chinese produce increasing, Korean produce, which was chosen by consumers because it was better quality than that from China and cheaper than produce from Japan, has been losing favor,” said an official with the corporation's farmers support department, explaining why it was necessary to go premium.

“While going premium, we will try to keep the prices of Korean produce a bit lower than what’s coming from Japan to successfully find a place in new retail channels.”

Strawberries and a variety of grapes call shine muscat are two “star” items the corporation chose to highlight last year. It started with strawberries and selected five agriculture groups out of the 35 in Korea. These groups, which count thousands of farmers across the nation as their member, are testing out three new varieties of strawberries — maehyang, guemsil, and alta king. The corporation is involved with the planting and growing throughout the year. The fruit harvested from this month will make its way out to the overseas market in a bit to claim Korea's spot in the premium produce market overseas.

The sweetness of the strawberries differs depending on which month they are harvested in. From December to February when fruits are the sweetest, geumsil fruit, for example, must weigh over 27 grams and measure 13 brix on the sweetness scale before they can be picked. An average strawberry usually weighs 20 grams and measures 11 brix. Another factor that plays into the higher prices of the premium varieties is that they must be at least 90 percent ripe before they are harvested, unlike regular varieties which can be picked and sold when they are just 70 to 80 percent ripe. Although the exact price of these new strawberries has not yet been set, it is expected that they will cost double what commonly seen strawberries are sold for locally.

If the harvests from later this month exceed expected yield, the food corporation plans on holding events in both Hong Kong and Thailand to attract buyers. 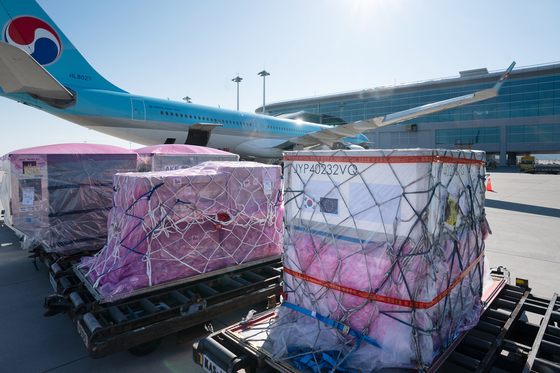 Boxes of strawberries ready to be transported to Hong Kong and Singapore on specially-designated planes. [MINISTRY OF AGRICULTURE, FOOD AND RURAL AFFAIRS]

Because of their delicate nature, strawberries are mostly exported via airplane. In line with this, the government has been working on ways to support the export of larger volumes of strawberries. The Ministry of Agriculture, Food and Rural Affairs is offering flights that solely operate to deliver strawberries to Hong Kong and Singapore, after previously operating such flights to Singapore from December last year to April.

Such exclusive flights will operate from Dec. 1 for five months. There will be two flights a day, every day, to Hong Kong and one flight a day, five times a week, to Singapore. These flights have the combined capability of delivering up to 5,895 tons of strawberries over the five-month period.

“Thanks to such exclusive flights, we expect there to be no difficulties in the export of premium strawberries from Korea even as many countries are currently facing supply chain issues,” said Jeong Hyeon-chul, a food industry policy team official within the ministry.

“To grow the number of Korean strawberry consumers bigger than ever before, we will provide support from their production to their export.”

Last season, Korea exported $20 million worth of strawberries to Hong Kong and $15 million to Singapore.

The food trade corporation has also been involved in hosting pop-up events with local industry experts in Singapore, to test the waters for future exports of premium quality produce.

Olivia Lee, a food content creator who previously worked as a chef, has been on the frontline in Singapore, spreading the word about Korean produce. 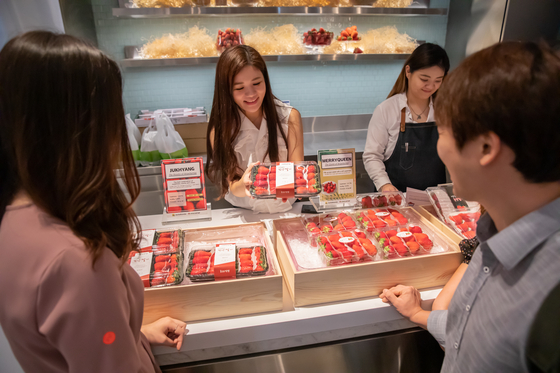 
Such produce included pine nuts and wild songi mushroom (also known as pine mushroom) as well as a variety of fruits like strawberries, shine muscat grapes and melons. Lee also hosted a Zoom session with chefs in both Singapore and Korea to show how to best incorporate the aforementioned ingredients into new dishes. 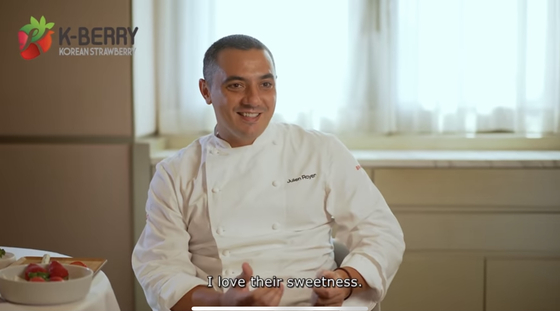 
“What’s important is to have these leaders in the culinary scene actually use the produce and make them want more,” said Lee. She even visited farmers in Korea last year to learn more about their produce and source the best quality ingredients possible.

After working with government officials on temporary projects, she saw a consistent demand from local in Singapore for premium Korean produce and set up her own retail brand SoGood K. She now imports small quantities of fruit as well was products like sesame oil and gamtae, a type of seaweed often used to add gamchilmat (umami) to a dish.

“There definitely is a demand,” said Lee who is also considering branching her new business out to Hong Kong. “Someone might say such business is not possible, but having someone tell me that it’s impossible is my motivation to make it work.”

‘Eliminate me from the contest’